I hear music in time as a journey. Often this involves viewing our home planet Earth from a distance and considering our place in the universe. I gravitate toward remote and abandoned places on Earth or beyond as a metaphor. 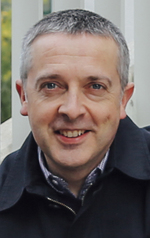 The Stuart Greenbaum sound has overt connections to jazz, pop and minimalism but is equally grounded in the Western art music tradition.

With a catalogue of over 200 works written for the concert stage, Greenbaum's music is heard regularly in Australia and abroad. Nelson, a three-act opera with libretto by Ross Baglin, was presented in London in 2005 and premiered in full at the 2007 Castlemaine State Festival. Their second opera, The Parrot Factory, received a five-show season in 2010, staged by Victorian Opera at the Malthouse. Major choral works include The Foundling, commissioned by Cantori New York in 1997, and From the Beginning, commissioned for the sesquicentenary of the Royal Melbourne Philharmonic in 2003.

His orchestral output includes works for the SSO, MSO, AYO and, recently, City Lights a Mile Up, commissioned by the Tasmanian Symphony orchestra. Major chamber works have been written for the Australia Ensemble, the Southern Cross Soloists, Ensemble Liaison, the Grigoryan Brothers and the Flinders Quartet.

He was featured composer at the 2006 Aurora Festival, resident composer at the 2009 Port Fairy Spring Music Festival and Composer in Focus at the 2009 Bangalow Music Festival. In 2009 he was Australia's representative for the Trans-Tasman Composer Exchange, working in Auckland with NZTrio on The Year Without a Summer, which toured nationally for Chamber Music New Zealand, in Sydney for the ISCM World New Music Days (2010), and internationally at the City of London Festival (2011). He was featured composer with the Flinders Quartet in 2016.

The Greenbaum Sonata Project (commenced in 2000) aims to create a substantial recital work for all major orchestral instruments, contributing new repertoire for professional and emerging artists. Across the wind, brass, percussion and string families, this will comprise around 20 major works. The complete project will constitute a collected body of work of around seven hours of music.

Prizes include the Dorian Le Gallienne Award, Heinz Harant Prize, and the Albert Maggs Award. 90 Minutes Circling the Earth won Orchestral Work of the Year at the 2008 Classical Music Awards.

Having studied composition with Broadstock and Conyngham at the University of Melbourne, Greenbaum now holds a position in the Melbourne Conservatorium of Music as Professor and Head of Composition.