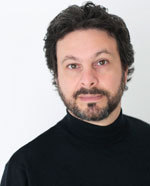 Mark Viggiani has been active as a composer since the early 1990s. His most recent work has been driven by a long-held fascination with early twentieth-century blues and Italian folk and popular music. To this end he has combined these influences with contemporary techniques to create a distinctively personal style, most recently in the song cycle Vorrei... and the Field Holler series, so far comprising works for trombone and piano, violin and guitar, choir and orchestra.

His numerous awards and prizes include the 2014 Melbourne Conservatory of Music / Melbourne Recital Centre award, for which the work Cleopatra was commissioned for Ensemble Liaison and Greta Bradman; and the 2012 Zavod Classical/Jazz Fusion Composition Award for John the Revelator. This work was composed for and premiered by the Mons Kinky Pinky Orchestra at the 2011 Ars Musica Festival in Mons, Belgium. He was also a winner of the Intermediate division in the 2010 International Music Prize for Excellence in Composition for the piano work Black Rook Prelude, and his organ work Lindeman Variations was awarded a prize in the 2008 Victorian Society of Organists New Music Awards.

In 2013 Viggiani completed a PhD in Music Composition with at the University of Melbourne, during which time he received the Australian Postgraduate Award (APA, 2009-12). During his candidature he also undertook studies in Torino with Giulio Castagnoli and attended masterclasses at the Venice Biennale. More recently, he completed a residency at the Atlantic Centre for the Arts in Florida with composer Martin Bresnick.

Most recently Viggiani has been working on his first music theatre work Seven Deadly Sins, in conjunction with Opera Victoria. Other recent commissions include a new work for the Song Company's 2015 Michael Leunig program, One Last Tango, performed by Orchestra Victoria under Richard Mills; Lomax Sketches for the Tasmanian Symphony Orchestra; Aus Der Munitionsfabriken, which was premiered by Speak Percussion at the 2007 Big West Festival; and a trio for the ensemble Syzygy.

Viggiani is also a capable guitarist, and his continued interest in the instrument has led to the creation a large body of music including solos, didactic works and mixed ensemble pieces. Black Cat Tango, in its various forms, has received much radio play in Australia and Europe. It has been arranged for Amsterdam-based guitar duo Z.O.O. Duo, who recorded the work on A Sympathetic Resonance in 1998. Another tango, Cabaret Closed appears on the 2014 CD Invitation to the Tango. He has also enjoyed success as a performer in his own right, releasing a CD of original compositions The Rainmaker on Move Records to international critical acclaim