I am an artist who uses music to tell stories of heart and courage. I seek to unpack the human side of life and give voice to those without one as well as support artists to have their own strong voices in the world... 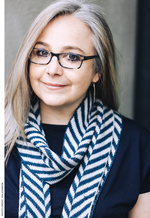 Composer, Educator and The Artists' Mentor, Katy Abbott is forensically curious about what makes us tick. Her music leads the listener through a narrative of sound, exploring concepts of home, place, connection and human nature, frequently exhibiting a cheeky humour and cleverly juxtaposing contemporary flavours on traditional settings.

Abbott's compositions have been performed, published and recorded around the world, brought to life by many of leading Australian chamber ensembles including the major Australian orchestras and chamber ensembles including Syzygy Ensemble, Flinders Quartet, Halcyon, Ensemble Offspring and Sutherland Trio. Her works have been performed in UK, Europe, Asia and the USA and featured in many Australian and International music festivals, most recently at PASIC, Music Academy of the West: Summer Festival and Canberra International Music Festival.

A versatile creative talent, her body of work incorporates orchestra, chamber and music for voice, an area where she exhibits a particular flair. She completed her PhD in 2007 including a guide to writing for the voice as her thesis, working with Brenton Broadstock and Linda Kouvaras at the Melbourne Conservatorium of Music, University of Melbourne. Several of her works appear on the AMEB, ANZCA and VCE/HSC syllabi.

Abbott has been awarded the 2019 Paul Lowin Song-Cycle Prize for Hidden Thoughts 1: Do I Matter?, the 2013 Boston Metro Opera 'Gold Medal for Art-Song' for her song-cycle The Domestic Sublime and the 2011 Albert H. Maggs Award for Composition amongst others. She also spent time at Banff at the Centre for the Arts, Bundanon Trust and UKARIA Cultural Centre.

Hidden Thoughts 1: Do I Matter? (2017) is a festival piece based on the 'hidden thoughts' of women collected in an anonymous survey. An interview and ABC FM recording of Hidden Thoughts 1 is available as a New Waves Podcast. Hidden Thoughts 2: Return To Sender (2020) was premiered on Melbourne Digital Concert Hall in July 2020 and amplifies the hidden voices of Australians who wrote letters of support and encouragement to asylum seekers on Nauru Island which were sent back to Australia undelivered.

As well as freelance composition, Abbott is Senior Lecturer in Composition at Melbourne Conservatorium of Music, University of Melbourne and was the recipient of the Australia Council of the Arts Fellowship (Music).

- Video: Katy Abbott on composition - In conversation with...

- Video: Katy Abbott on setting text - In conversation with...

- Video: Katy Abbott on Collaboration - In Conversation With...

- Video: Katy Abbott on No Ordinary Traveller - In Conversation With...

- Video: Katy Abbott on Recording - In Conversation With...