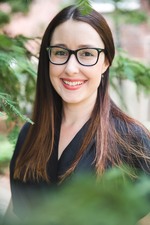 Lisa Cheney (b.1987) is an Australian composer of acoustic and acousmatic music, hailing from Queensland and now living in Melbourne. Her music communicates through varied styles which often explore notions of connection and authenticity through fascinations with the 'edge' of beauty; expression, poeticism, fragility, delicacy, resonant space, pacing, light and dark and atmospheric soundscapes. Cheney's work has been described as 'atmospheres of unfathomable spaciousness' (Partial Durations), 'melodic slivers with plaintive intensity' (The Australian) and 'fantastic and frightening in its detail and colour' (Resonate). Her body of work incorporates orchestra, chamber, voice, acousmatic collaborations, arrangements and works for theatre and ballet.

Cheney holds a Bachelor of Music in Composition and Master of Music from the Queensland Conservatorium of Music where she studied with Gerard Brophy and Dr. Gerardo Dirie respectively. Her research into the early career experiences of female composers in Australia was supervised by Dr. Brydie-Leigh Bartleet. She is currently completing a PhD in Music at The University of Melbourne, supervised by Dr. Elliott Gyger and Dr. Katy Abbott-Kvasnica.

Cheney's passion for championing new music can be seen in her role as co-founder of 'Making Waves' and an executive producer of the Making Conversation: Australian Composers' Podcast. In 2017 she was named the Victorian Young Achiever of the Year for the Arts. Thanks to the support of the APRA AMCOS Art Music Fund Award, she recently completed a new opera for children based on Edward Lear's nonsense poem, The Owl and the Pussycat which premiered at Festival 2018 at the Gold Coast Commonwealth Games.

Lisa Cheney is available to consider commissions and collaborations. Additional score requests and personal contact can be made through e-mail (above).