I am preoccupied with perceptions of how the world works, and how it is structured, especially patterned phenomena or processes. These ideas are simulated in music as textures and gestures. 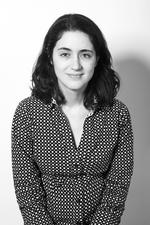 Peggy Polias is a Sydney-based composer and music typesetter. Born in 1981, Polias learnt the piano during her school years, and began writing music while in high school. She completed a Bachelor of Music (Composition; First Class Honours) in the Sydney University Music Department, graduating in 2003, and later a Master of Music (Composition) under the supervision of Professor Anne Boyd at the Sydney Conservatorium of Music, graduating in 2010.

Polias used the Matryoshka (Russian nested doll) metaphor to frame discussion and comparison of her Master's degree compositions. One such work was The Moon (2007) for 11 instruments, joint winner of the 2007 Fellowship of Australian Composers/University of Sydney Women's Composer Award. The Moon was premiered at the 2009 Kammerklang concert at the Sydney Conservatorium.

Polias attended the Australian Youth Orchestra National Music Camp in 2010 and has also had works workshopped and performed by Halcyon, Ku-Ring-Gai Philharmonic Orchestra, Chronology Arts, and at the Canberra International Music Festival.

Polias works as a music engraver, preparing scores, instrumental parts and other print music materials for some of Australia's leading composers and various publishing entities. She also worked part time at the Australian Music Centre for several years until the birth of her daughter in 2013. After a break from composing to concentrate on new-motherhood, Polias resumed writing in 2014, and in 2015 was awarded the inaugural Peter Sculthorpe Music Fellowship by Arts NSW and the Sydney Conservatorium of Music.

2015 also saw the commencement of a collaboration with Melbourne-based composer Lisa Cheney on Making Waves, an online listening project focusing on early-career Australian composers. Polias and Cheney curate an hour-long playlist each month from the streamable recordings of their composing colleagues, making it easier to discover and hear new Australian music.

During her studies Polias learned to play in a Javanese gamelan, and for a number of years continued to enjoy the form as a member of the Langen Suka Sydney Gamelan Association. This has been an important experience for Polias, and has had a significant influence on her own music. Other interests and influences include: fractals, feminism, handicrafts, Rebetika, minimalism and repetitive processes, and rock and pop music.