The Gates of Darkness Shall Never Be Closed to the Smugglers of Light. 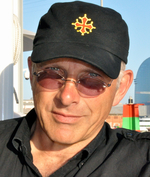 He studied the clarinet with his father, Donald Westlake (principal clarinettist, Sydney Symphony Orchestra 1961-1979) and subsequently left school early to pursue a performance career in music.

From the age of 17 he was touring Australia and the world, performing as a freelance clarinetist, bass clarinetist and saxophonist with ballet companies, a circus troupe, chamber music ensembles, fusion bands and orchestras.

In 1983 he studied bass clarinet and composition in the Netherlands and was appointed composer in residence for ABC Radio National the following year.

From 1987 to 1992 he was resident clarinettist with Australia's leading chamber group The Australia Ensemble, and went on to join guitarist John Williams's group Attacca as a composer and performer.

As a composer for the screen, his film credits include the feature films Ali's Wedding, Paper Planes, Miss Potter, Babe, Babe: Pig in the City, Children of the Revolution, and The Nugget, plus the Imax films Antarctica, The Edge, Imagine, Solarmax, and numerous others.

His compositions have earned numerous accolades, including the Gold Medal at the New York International Radio Festival and 15 APRA awards in the screen & art music categories.

His secular mass Missa Solis - Requiem for Eli was winner of the prestigious 2013 Paul Lowin Orchestral Prize, won the 2011 Limelight Award for Best New Composition, and was named Orchestral Work of the Year at the 2012 APRA & AMC Art Music Awards.

He won The Paul Lowin Orchestral Prize (one of Australia's richest music prizes) a second time in 2019 for his oboe concerto Spirit of the Wild.

In 2004 he was awarded the HC Coombs Creative Arts Fellowship at the Australian National University and holds an honorary Doctorate in Music, awarded by the University of New South Wales in 2012.

Nigel Westlake made his conducting debut with the Queensland Symphony Orchestra in 1997 and has since conducted performances and recordings of his own works with all the major symphony orchestras in Australia.

In December 2016 he made his US conducting debut at the Lincoln Centre with the New York Philharmonic.

In 2008 he founded the Smugglers of Light Foundation in memory of his son Eli, to promote cultural awareness and empowerment through education via the mediums of music and film in youth and Indigenous communities.

He is represented by Maggie Rodford Air-Edel (London).

Kit: Out of the blue : music resource kit / devised by Kim Waldock.

eBook: Out of the blue : music resource kit [eKit] / devised by Kim Waldock.

- Video: Ali's Wedding - Behind the scenes with Nigel Westlake and the Sydney Symphony