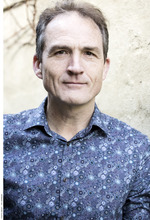 Michael Kieran Harvey FAHA was born in Sydney in 1961 and studied piano with Alan Jenkins, Gordon Watson, and at the Liszt Academy, Budapest, under Sándor Falvai. His career of more than 40 years has been notable for its diversity and wide repertoire. He has especially promoted the works of Australian and contemporary composers and recorded over 50 solo CDs on various labels. He has premiered many new Australian and international concertos with all Australian symphony orchestras, and more than 300 solo Australian keyboard works alone, many of which are dedicated to him.

Harvey began piano lessons with his grandmother at age three and later with Alan Jenkins at the Canberra School of Music, while attending the notorious Marist Brothers, Canberra - his experiences here led him to become religion-free by his early teens. By age eleven Harvey had successfully auditioned for Yehudi Menuhin to study at his music school in Surrey, during one of Menuhin's Australian tours. Unable to meet the travel costs to the UK, Harvey instead attended the Sydney Conservatorium High School as a scholarship student from 1974-79. During his time here with Gordon Watson, Harvey developed a strong interest in jazz and rock, touring outback Australia as keyboardist with the school's big band, directed by Geoff Bailey. In 1980 he began his DSCM at the Conservatorium, again under Watson, completing it in 1988 after an interim period of study with Professor Sándor Falvai, Director of the Liszt Academy, Budapest, from 1984-87. While studying in Budapest Harvey gained considerable experience in international piano competitions, becoming a finalist and recipient of the Debussy Medal in the Guilde Francaise competition in Paris in 1985, and finalist in the inaugural Utrecht Liszt competition in 1986. He gave his Sydney Opera House debut in 1988 then moved to Melbourne, where he was briefly on staff at the VCA.

In 1993 Harvey became the first Australian to win a major international piano competition, the Inaugural Ivo Pogorelich International Solo Piano Competition in Pasadena, the world's richest piano competition showcasing the most challenging piano repertoire played by the world's leading professional pianists. Debuts at London's Wigmore Hall and Royal Academy, the Kennedy and Ambassador Centres USA, the Warsaw Autumn, and many more international venues followed, culminating in several historic performances of Messiaen: his Vingts Regards (Master Pianists series, Amsterdam's Concertgebouw 1997), Turangalila on a new Stuart piano (QSO 2001), the Australian premiere of Catalogue d'Oiseaux with Peter Cundall (2005) and Des Canyons aux Etoiles (SSO 2005). After proving himself as an interpreter in this arena he subsequently dedicated himself to promoting his Australian colleagues' work and developing his own compositional language, believing original creative work to be a more enriching and urgent path than the repetition of traditional repertoire.

Since 1998 Harvey has been collaborating with Martin Wright of Move records, producing a series of recordings titled The Michael Kieran Harvey Collection that showcase a range of challenging and unusual Australian and contemporary music. The series encompasses traditional repertoire from Liszt through major 20th and 21st century composers such as Ravel, Rachmaninov, Messiaen, Shostakovich, Stravinsky, Carter, to jazz, electronics, jazz/rock and alternative genres. Latest releases include Piano Sonata #5 'Greta': Concerto in no need of an orchestra, 2020, Piano Sonata #6: '17 Graeme Lee Prints', 2020 and Catalogue des Errances Bibliques: Symphony in no need of an orchestra, 2021.

As well as his activities as a pianist, Harvey holds a PhD in composition. His compositions have been performed in Europe, the UK, North and South America and Asia, in addition to major Australian festivals. He concentrates on non-standard formats, often humorously questioning classical music and embracing diverse influences.

His hour-long multi-keyboard homage to Zappa, 48 Fugues For Frank, was premiered at Mona Foma in 2010 and received the AMC/APRA Tasmanian State Award for the Instrumental Work of the Year in 2011. This marked the beginning of a fruitful collaboration with Tasmanian concrete poet Arjun von Caemmerer. Harvey's Psychosonata (Piano Sonata no. 2) was presented at MONA in their 2012 Synaesthesia festival. Harvey's trio Deus est Fabula was premiered by Plexus at the Melbourne Symphony Orchestra's 2014 Metropolis series at the Melbourne Recital Centre. A live CD/DVD recording of his epic Iyengar yoga and ensemble work Patañjali (2015) was released on the Move label and received an AMC/APRA Tasmanian State Award for Instrumental Work of the Year in 2016. Piano sonata no. 3 "Aporia" was premiered at the MSO's 2016 Metropolis series. His 90-minute Green Brain cycle (based on the eponymous Frank Herbert novel) was premiered at the Mona Foma Festival in 2018, and was critically acclaimed as a festival highlight. This festival version was released on a 2CD format by Move in 2018. Piano Sonata #4 "A. Gramsci", Astro Labe, Coeur de Lion and PRTZL were premiered at Mona in November 2018. His multi-instrumental and narrator cycle Catalogue des Errances Bibliques (Symphony in no need of an orchestra), based on The Encyclopedia of Biblical Errancy was premiered at the Australian National Academy of Music (ANAM) in 2019.

Harvey gave the 2012 Peggy Glanville-Hicks address on the state of contemporary Australian art music to acclaim and controversy.

As a pianist Harvey's awards include the Grand Prix in the Ivo Pogorelich Piano Competition, (1993, USA), the Debussy Medal (the Guilde Francaise Concours Paris 1986), the Australian Government's Centenary Medal (2002), the 2009 AMC & APRA Classical Music Award for Distinguished Services to Australian Music, and the 2014 Tasmanian State Award for the Performance of the Year (for Elliott Gyger's Inferno).