Ashley has a deep interest in contemporary aesthetics and is an advocate for Australian music endeavour – ‘Cultural ownership is an important element to engagement, particularly in an increasingly globalized world where the fragility and uniqueness of innovation can be easily overwhelmed’. 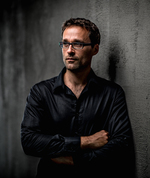 Ashley Hribar is an Australian-born pianist and composer of German and Slovenian parentage. He has developed a reputation as a most versatile musician embracing multimedia, world music, cross-disciplinary arts forms and a broad range of traditional genres.

Ashley's compositions are polystylistic collages, often employing extended techniques, voice and the deployment of objects. Recent works include Walkabout (2018) and A Night in the Outback (2017) both for piano and didjeridu and the dance/soundtrack to Richard III commissioned by Silents Now (UK). He composed and performed the music for Betty Rettet die Volksbühne (Die Volksbühne, Berlin) in collaboration with actress Bettina Lamprecht. His solo piano works Paganini Variations, 'ash' Fantasie plus a cadenza and arrangement for Gershwin's Rhapsody in Blue appear on his album Piano Rhapsody (Auster Records). Improvisation is a key element to Ashley's creative process, both solo and collaboratively, including 'live' improvisations to the classic silent films Sherlock Jnr and Hamlet. His solo album for The Wizard Tone Records Improvisation Series was nominated for the South Australian Arts Awards in 2017. His most recent album is a selection of improvisations recorded on the Stuart & Sons piano of 102 keys at Beleura House, Mornington.

Ashley has a deep interest in contemporary aesthetics and is an advocate for Australian music endeavour - 'Cultural ownership is an important element to engagement, particularly in an increasingly globalized world where the fragility and uniqueness of innovation can be easily overwhelmed'. Projects include Correspondance - commissioning Australian composers to write especially for the Australian Stuart & Sons, the first acoustic piano to reach a frequency range of nine octaves (108 keys); Anatolia - quartet arrangements of Turkish folksongs with soprano, Ayșe Göknur Shanal (Sydney Opera House) and Sound and Colour in Scriabin's Piano Sonatas incorporating video projections of Australian opals (2017 European Tour).

In 2005, Ashley won the International Gaudeamus Interpreters Competition and the 2008 Michael Kieran Harvey Scholarship. He has since performed in countless festivals including the Mersin International Music Festival, the Port Fairy Spring Festival, Koper Biennale, Beethovenfest and the Gaudeamus Festival.

Ashley is indebted to the invaluable guidance of his teachers Ann Adamek, Stefan Ammer, Stephen McIntyre, Eleonora Sivan, Gil Sullivan, Graham Williams and Karl-Heinz Kämmerling. In 2018, he completed his performance PhD at the University of Adelaide focusing on the music by American composer, Frederic Rzewski.