"I was drawn to the imponderable as a child. Sounds of excitement, soothing, deep emotion, and just pure fun. A parallel universe connecting me with the wider world, and at the same time took me deep inside myself. I’m finally coming close to realising some of my musical dreams." 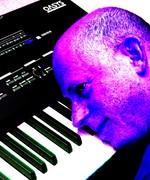 John Arthur Grant's music brings together the two main strands of his early influences - classical and rock music - to forge his own distinctive styles. His post-classical compositions can be strongly rhythmic, but there's a lyrical and melodic side that he likes to give equal attention to. Similarly, he's a lover of simple emotionally-lifting chord movements, but also likes to turn to complex harmonic structures on ocassions. Interweaving these seemingly diverse elements makes for music that is enthralling and often challenging, but that always holds interest.

Two directions define his current practice: solo piano pieces, or piano with sparse accompaniment (an album is in pre-production), and concert works for solo instruments or small ensembles, and choir.

Recent performances include: 6 Abbreviations for solo bassoon, performed by Inventi Ensemble/Matthew Angus at three concerts in Melbourne (July 2016); Henso-Kyoko #1 variations for solo flutes performed by Peter Sherdian at the Subterranean Sonorities concert for Melbourne Composers League (November 2016); Notes From The Borigove performed by Astra Choir - (Melbourne, 2016) and the Australian Voices (Brisbane, March 2017 - a studio recording of this work is also being released). A performance of Seven Rejoinders by a clarinet trio (various arrangements are available) is included for the Melbourne Composers' League East Meets West concert program in September 2017.

John continues to find ways to interweave the musics that he's always loved and admired for half a century, and to further develop his own individual voice. He is a member of Melbourne Composers League, AMC, the Astra Chamber Music Society, Music Victoria, the Music Arrangers Guild of Australia, a supporter of Cut Common, Rehearsal magazine, and a subscriber to 3MBS-FM Melbourne. He volunteers for the music industry charity Support Act.

Music can lead to all kinds of unexpected adventures. In John's case,

• He dreamed of playing in progressive rock bands, and performed on the TV show Countdown.

• He travelled from Melbourne to Broome, about as far as you can go and still be in Australia, just to perform once in an aircraft hangar.

• He enjoyed working in recording studios, but didn't intend to become a session musician, or to gain enough engineering skills to make a pro home studio a reality.

• He lusted after the sonic possibilities of synthesizers, along with pianos and organs, and owned many fine examples.

• He performed on the famous Melbourne Town Hall organ.

• He programmed a synthesiser to sound like a pipe organ at Melbourne Town Hall, when the real thing was out of commission.

• He played a Fringe Festival show with totally improvised ensemble Now! Here! This! where the only performance direction was, "We are frogs in a pond".

• He found that he enjoyed solving the little musical puzzles involved in composing advertising music; "jingles", as they're commonly known.

• He conducted synthesizer and music technology training sessions and demonstrations all around Australia and NZ, and throughout Asia, including twice in Tehran.

• He found himself at the home of Roland founder Ikutaro Kakehashi, and in meetings with Korg founder Tsutomu Katoh.

• He travelled from his Melbourne base to Christchurch, Cairns, Abu Dhabi and many more places, just to do a single short performance.

• He discovered that arranging music on computer software meant that his illegible hand-writing was taken out of the equation, leading to years of arranging work for Channel 9's Carols By Candlelight and other live-to-air broadcasts, and for Hugh Jackman, Jerry Lewis, and hundreds more clients.

• He improvised with the Terminal Quartet at the Make It Up Club, partly with fingers in ears when the performer next to him got a little too loud.

• He met a puppeteer and ended up composing five soundtracks for Dream Puppets, most of them 40 minutes long, with no dialog interrupting. This chance meeting lead to his music being heard all around Australia, and overseas festivals, and an award for Best Music at the 2nd Nanchong International Puppet Art Week, May 2017.

• He has written music for instruments that he previously knew little about, such as cello, bassoon, bass flute, and basset horn.

Further adventures will be reported here. This full history as a working musician serves only to propel him forward as he now concentrates on composing solely for his own projects and commissions.