Listen. What do you hear? 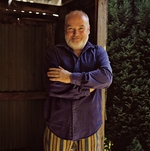 Andrew Ford is a composer, writer and broadcaster and has won awards in all three capacities. Born in Liverpool, England in 1957, he was educated at the University of Lancaster. He came to Australia in 1983.

Ford has composed orchestral and chamber music, operas and music-theatre pieces, and a wide range of vocal and solo instrumental works. His music has been featured internationally at festivals in Adelaide, Aspen, Ferrara, Houston, Huddersfield, Istanbul, Kuhmo, Seoul, Sydney and at Salzburg's Aspekte. All the major Australian orchestras have played his works, along with groups such as the London Sinfonietta, the Australia Ensemble, Het Trio, the Hong Kong Sinfonietta, the Pittsburgh New Music Ensemble and the Black Dyke Band. His piano pieces have been played by Peter Donohoe, Lisa Moore, Gerard Willems and Michael Kieran Harvey, his vocal music sung by Katie Noonan, Teddy Tahu Rhodes, Yvonne Kenny and, above all, Gerald English, for whose voice Ford composed a dozen pieces.

Ford's music has won national and international awards. He has been composer in residence with the Australian Chamber Orchestra (1992 - 94), the Australian National Academy of Music (2009) and the Australian Festival of Chamber Music (2009). He was the Peggy Glanville-Hicks Composer Fellow (1998 - 2000) and Australia Council Music fellow (2005 - 06), during which period he composed, among other works, Scenes from Bruegel, jointly commissioned by the West Australian Symphony Orchestra and the New Juilliard Ensemble, and first performed by the latter at Alice Tully Hall, New York in April 2006.

Recent works include a symphony for the Orchestra of the Australian National Academy of Music under Brett Dean (2008); an opera Rembrandt's Wife (libretto by Sue Smith) for Victorian Opera (Green Room Award for Best Opera 2010); Blitz for the Tasmanian Symphony Orchestra (2011); string quartets for the Brodsky Quartet, the Noise, the Australian String Quartet, and the Flinders Quartet; song cycles, Last Words, for Jane Sheldon and the Seraphim Trio (2014 Art Music Award), Comeclose and sleepnow (2016) for Gian Slater and the Monash Art Ensemble, and Nature (2019) for ensembles in Stockholm, Sydney, Oslo and Dublin; a Missa Brevis (2015) commissioned by four Australian cathedrals; the electric guitar concerto, Raga (2015), for Zane Banks and the Adelaide Symphony Orchestra, and Peter Pan (2015-17), an opera - again with Sue Smith - for Gondwana Choirs.

Beyond composing, Ford has been an academic (on the Faculty of Creative Arts at the University of Wollongong from 1983-95) and given lectures in the USA, Europe and Asia. In 1998 he won the Geraldine Pascall Prize for critical writing. Ford wrote and presented the ABC radio series Illegal Harmonies (first heard in 1997), Dots on the Landscape (2001), Music and Fashion (2005), The Sound of Pictures (2010) and Earth Dances (2015). He has also written nine books - most recently a memoir, The Memory of Music - and, since 1995, presented The Music Show each weekend on ABC Radio National. In 2018, he was H.C. Coombs Creative Arts Fellow at the Australian National University.

- Review: The Song Company Australian Made with Italian Glasss

- Review: Australian Made with Italian Glass: The Song Company 20 March 1992

- Video: You must sleep, but I must dance (interview with Andrew Ford, and performance excerpts)

- Video: Andrew Ford on Composition I - In conversation with...

- Video: Andrew Ford on Inspration - In conversation with...

- Video: To my excellent Lucasia - interview with composer Andrew Ford

- Video: Andrew Ford on Composition II - In conversation with...

- Video: Andrew Ford on Writing for Voice - In Conversation With...

- Video: Andrew Ford on Setting Text - In Conversation With...