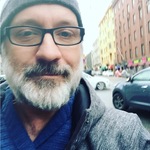 Composer David Chisholm has an international practice, defined through diverse and hybrid collaboration, for which he has won six Green Room Awards, a French Australian Chamber of Commerce and Industry Award, a High Commendation at the 2009 Paul Lowin Prizes, a Mention at 36th Bourges International Competition of Electroacoustic Music and Electronic Art, a Special Mention in the X Media Forum, 31st International Film Festival in Moscow, the Medibank Private State and National Arts Awards and the National Young Achiever of the Year.

David has undertaken multiple artist residencies in Australia, France and the USA and, in 2017, was an Australia Council for the Arts Composer in Residence at HIAP in Helsinki, Finland. He has presented seminars on his music in Australia, France, New Zealand, Chile, Ireland and Italy.

Relocating to New Zealand in early 2019 to take up his current role as Composition Convenor at the School of Music, University of Auckland, David holds a PhD from Melbourne University where he taught in 2016, having also taught at Centre for Ideas, Victorian College of the Arts (2003-06) and Monash University (2012-18).

David is the founding Artistic Director and CEO of the Bendigo International Festival of Exploratory Music.

- Video: The Making of Kursk: An Oratorio Requiem