Much of my work explores creative responses to the poetics of incomplete knowledge and broken modes of communication. 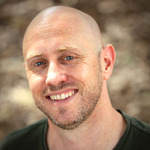 Damien is a Sydney-based composer, artistic director and academic. Seeking a music for the body rather than the brain, his work is characterised by unusual instrumentations, open forms and is often multisensory in nature integrating sound with other media.

From 1995-2015 Ricketson was the co-founder and Co-Artistic Director Ensemble Offspring, a unique arts company dedicated to adventurous new music through whom much of his music has been performed. From 2015-2019 he was the Program Leader of Composition at the Sydney Conservatorium of Music, University of Sydney.

Ricketson completed a Bachelor of Music at the Sydney Conservatorium where he studied with composers such as Bozidar Kos, Richard Toop and Martin Wesley-Smith prior to studies at the Royal Conservatory in The Hague with renowned Dutch composer Louis Andriessen. He holds a PhD from the University of Sydney where he currently teaches.

Many of Ricketson's more substantial works have been show-length staged productions including: The Howling Girls (2018), an opera co-created with director Adena Jacobs exploring trauma and the voice presented by Sydney Chamber Opera; The Secret Noise (2014), a hybrid music-dance work; and Fractured Again (2010), a multimedia production both presented by Ensemble Offspring.

Ricketson is a Senior Lecturer at the Sydney Conservatorium of Music, University of Sydney.