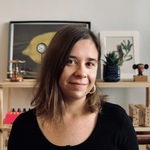 Elizabeth Jigalin is a composer based in Sydney, Australia.

Driven by the joy of sharing music with others, Elizabeth composes collages of curiously playful and imaginative music and frequently collaborates with artists across disciplines.

Elizabeth is the founder of creative music collective the music box project who were awarded Excellence for Experimental Music at the 2020 APRA AMCOS/AMC Art Music Awards for shallow listening - a project premiered at Bendigo International Festival of Exploratory Music that featured her music theatre work prelude & pickle (2019).

Recently, Elizabeth has composed music for the Voices of Women film project Clearway (2020) and created a web/game opera EXQUISITE CHORUS (2020) commissioned by Gaudeamus Muziekweek/Netherlands. In 2019. her suite of exploratory miniatures field notes (2019) were premiered and explored as part of Soundstream's Emerging Composer Forum.

Elizabeth's music has been performed on the National Carillon in Canberra, explored in places ranging from the bush to recital halls and premiered at festivals such as Extended Play and Pacific Alliance of Music Schools Festival. Elizabeth has composed music for animation shorts (in collaboration with animator Nastia Dyakova) and composed/performed new soundtracks for over 20 silent films (often in collaboration with violinist Jane Aubourg) as part of Australia's Silent Film Festival. Other collaborators include Ensemble Offspring, Sydney Youth Orchestra, Moorambilla Voices and Kaldor Public Art Projects.

Elizabeth studied with Damien Ricketson at the Sydney Conservatorium of Music as a recipient of the Ted & Susan Meller Scholarship and Ignaz Friedman Memorial Prize.

Elizabeth also has a lot of fun making music with guitarist Danica Hobden as 'dnka+zil' and in the band 'nou'.

Elizabeth enjoys teaching composition, encouraging students to think creatively about music. She has taught composition privately and at schools across Sydney, presented composition workshops for Sydney Youth Orchestra and as part of Sydney Symphony's "Tuned Up!" teacher training program and tutored at the Sydney Conservatorium of Music.

Explore and read about current work in her notebook.