When contemporary music is able to meaningfully interrogate tradition, a unique alchemy is achieved whereby past and present are experienced simultaneously. In my work I aim to naturalise this process to a point of individuality such that the music appears to be innately cognisant of the past. 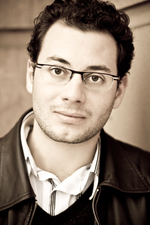 Jack Symonds (b. 1988, Sydney) is a composer, conductor and accompanist, and Artistic Director of Sydney Chamber Opera. He studied composition at the Royal College of Music, London under Kenneth Hesketh, was mentored by Detlev Glanert at Dartington and completed undergratuate studies at the Sydney Conservatorium of Music where he received the University Medal. Trained also as a pianist and trombonist, he continues to work regularly as an accompanist and pianist, giving the premiere of many new works as well as frequently conducting his own and others' music.

He has written extensively for the voice in a variety of stage and chamber music settings, including The Shape of the Earth after Patrick White's Voss, Climbing Toward Midnight, a chamber opera re-imagining the second act of Wagner's Parsifal and the Dostoevsky opera Notes from Underground (2011, restaged at Carriageworks in 2016). He has also written works for the Australian Chamber Orchestra, JACK Quartet (US), three works for the Australia Piano Quartet, Composers Ensemble (UK), cellists Timo-Veikko Valve and Patrick Murphy, the Streeton Trio, soprano Jane Sheldon a viola d'amore concerto for BIFEM and 2015 concert series curated around his music by Affinity Collective which included three premieres.