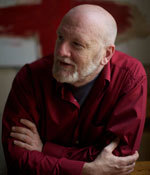 Composer and viola player Brett Dean studied in Brisbane before moving to Germany in 1984 where he was a permanent member of the Berlin Philharmonic Orchestra for over 15 years.

Dean returned to Australia in 2000 to concentrate on his growing compositional activities, and his works now attract considerable attention, championed by conductors such as Sir Simon Rattle, Markus Stenz and Daniel Harding. One of the most internationally performed composers of his generation, much of Dean's work draws from literary, political or visual stimuli, including a number of compositions inspired by paintings of his partner Heather Betts.

Dean began composing in 1988, initially working on film, radio and improvisatory projects. He became established as a composer in his own right through works such as Ariel's Music - a clarinet concerto which won an award from the UNESCO International Rostrum of Composers, the piano quintet Voices of Angels (1996) and Twelve Angry Men (1996) for 12 cellos. In 2001 he won the Paul Lowin Song Cycle Prize for Winter Songs, and in 2002/3 was Artist in Residence with the Melbourne Symphony and Composer in Residence at the Cheltenham Festival. He currently holds the position of Artistic Director of the Australian National Academy of Music.

Dean performs throughout the world as soloist, chamber musician and conductor. He has appeared as soloist with the Berlin Philharmonic, RSO Frankfurt and Montreal, Winnipeg, Melbourne and Queensland symphony orchestras, and performed numerous premieres of solo and chamber works by some of the leading composers of our time. He has conducted ensembles such as the Netherlands Chamber Orchestra, Australian Chamber Orchestra, Scharoun Ensemble and Birmingham Contemporary Music Group.

Dean's most widely-known work is Carlo for strings, sampler and tape, inspired by the music of Carlo Gesualdo, which has received over 50 performances. Other scores include Beggars and Angels (1999) commissioned by the Melbourne Symphony Orchestra, Pastoral Symphony (2001) written for Ensemble Modern, Testament (2003) for 12 violas of the Berlin Philharmonic and Eclipse (2003) for the Auryn String Quartet, commissioned by the Kölner Philharmonie. Last season the Melbourne Symphony/Stenz premiered Moments of Bliss, an orchestral precursor of his forthcoming opera Bliss, which was awarded 'Best Composition' at the 2005 Australian Classical Music Awards. A broad selection of his music has been recorded on labels such as ABC Classics and BIS records.

In April 2005 Dean premiered his Viola Concerto in London with the BBC Symphony - he also performs this work with the Los Angeles Philharmonic, Sydney Symphony, Hamburg Philharmonic, Netherlands Philharmonic and Orchestre National de Lyon. Other highlights of the 2005/6 season have included the world premiere by the Berlin Philharmonic of an orchestral work Komarov's Fall in March 2006, and the premiere at the Perth International Festival of Vexations and Devotions, a major new work for orchestra and chorus (co-commissioned by the BBC Proms). He appeared at the Kraftwerk Festival in Heimbach including conducting the premiere of a commissioned chamber work Recollections, and attended recording sessions with the Swedish Chamber Orchestra for an all-Dean disc on BIS.

This season Dean also conducts an all-contemporary program with the Melbourne Symphony and performs in a special program with the West Australian Symphony Orchestra, including conducting his own Short Stories and as soloist in Mozart's Sinfonia Concertante. Future conducting engagements include the Los Angeles Philharmonic's Green Umbrella series, the BBC Philharmonic in an all-Dean feature concert, the Netherlands Chamber Orchestra and the SWR Symphony Stuttgart.

Looking ahead, Dean will write a Violin Concerto for Frank Peter Zimmermann co-commissioned by the Cologne Philharmonie and Stockholm Philharmonic, a work for the Birmingham Contemporary Music Group and an opera Bliss, based on Peter Carey's novel of the same name.

The works of Dean are published by Boosey & Hawkes. He is represented by Intermusica www.intermusica.co.uk/dean.

Biography provided by the composer — current to October 2006