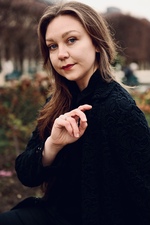 Kirsten Milenko (b.1993) is a Paris-based Australian composer and conductor. Milenko received the 2021 Roche Young Commission, awarded by Artistic Director of Lucerne Festival Wolfgang Rihm, and is a laureate of Fondation Royaumont. Her music constructs acoustic and electronic settings of an immersive and beautifully strange nature. In 2020, her debut opera/dance-theatre work Dalloway premiered at Pulsar Festival (Denmark), shortly after she was shortlisted to create a new opera with the Mannheim National Theatre (Germany) with Bea Redweik (librettist) and Johan Klint Sandberg (director). She studied composition at the Royal Danish Academy of Music (MMus class of 2020) with Niels Rosing-Schow, Simon Løffler, and Jeppe Just Christensen, and the Sydney Conservatorium of Music (BMus class of 2018) with Liza Lim, Natasha Anderson, Ursula Caporali and Rosalind Page. She currently studies conducting (CAS) at the Conservatorio della Svizzera italiana with Arturo Tamayo. Prior to her tertiary education as a composer/conductor, she studied International Relations and Piano at the University of New South Wales with additional studies in French and English Literature.

Premieres of her work have been given by ensembles and orchestras such as: Danish National Vocal Ensemble, Ensemble MusikFabrik, Bang on a Can, Esbjerg Ensemble, Ensemblage, Scandinavian Guitar Duo, Trio Ismena, E-Mex Ensemble, Gildas Quartet, Judgement of Paris Quartet, Adelaide Wind Orchestra, Sydney Conservatorium of Music Wind Symphony - with upcoming premieres by the Orchestra of the Lucerne Festival Academy, the Ulysses Ensemble and Athelas Sinfonietta Copenhagen scheduled for 2021. She has performed her work as a pianist at venues such as: Staatsoper Hamburg - Opera Stabile, Associació Cultural Sa Taronja, and as a conductor at Verbrugghen Hall.

Kirsten Milenko — current to May 2021