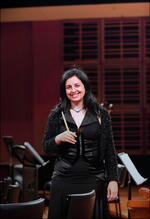 Ursula Caporali was an Italian composer living in Sydney. She obtained her MA degrees with highest distinction in both Piano - Florence Conservatorium 1995 - with Maestro Passaglia and Composition - Conservatorium of Milan 2005 and Florence 2008 - where she studied composition under Danieli, Gorli, Garuti, Rotondi and Cardi.
As a composer she was successful in gaining many scholarships including the Polytechnic University of Milan 2001 and the Accademia Chigiana di Siena 2003. In 2006 she was selected for a special course on sound design organized by Tempo Reale founded by Luciano Berio in Florence.
Ursula's varied compositions are over 50 for soloists through to orchestra include Harp Etude (Finalist at Women Composer's Competition), Geake und Fragmented (Piano), Dysnomia, Know the Unknown, Pax Tibulliana (Orchestra & Choir) and from 2006, with a growing interest in electronics, Implemented Mozart, and Blake's Project.
Ursula's repertoire ranges from baroque to contemporary music in which she has a special interest in promoting.
Ursula moved from Italy to Australia in 2009, completing her PHD in 2014, and worked as a casual staff member at the University of Sydney (Conservatorium University and Highschool of Music), as a composer, composition tutor, and piano teacher.