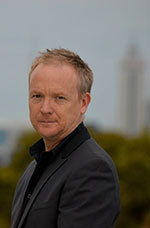 James Ledger is a composer with a breadth of work spanning solo, chamber and orchestral music. He has been composer-in-residence with the West Australian, Adelaide and Christchurch (NZ) Symphony Orchestras, the Australian National Academy of Music and the Australian Festival of Chamber Music. He has twice won the Work of the Year: Orchestral category at the APRA/AMC Art Music Awards, for his violin concerto Golden Years and the orchestral work Chronicles. He is currently lecturer in composition at the Conservatorium of Music at the University of Western Australia.

Ledger enjoys an ongoing collaboration with songwriter Paul Kelly. Their song-cycle Conversations with Ghosts won an ARIA award in 2013. In 2015 the Sydney and New Zealand Symphony Orchestras simultaneously premiered War Music for choir and orchestra, with text by Kelly.

2018 saw a focus on chamber music with a large-scale piano work for Alex Raineri and two new string quartets. One of the quartets incorporated live electronic sound manipulation and was toured nationally by the Australian String Quartet.

2019 sees the premiere of Thirteen Ways to Look at Birds - a new song-cycle by Ledger and Kelly to be premiered at the Adelaide Festival. Later in the year is a new concerto for orchestra and viola featuring Brett Dean as soloist.