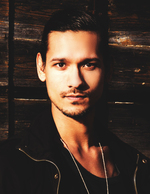 Mark Holdsworth is an Australian composer based in Perth. His music is characterised by a keen sense of drama and narrative, and a vivid personal voice that often asks questions pertaining to our humanity. Holdsworth's output depicts a strong conviction in the capacity of music to divulge abstract aspects of the human experience.

In 2020, Holdsworth was selected by the Sydney Symphony Orchestra for their new major commissioning project '50 Fanfares'.

Holdsworth is a graduate of the University of Western Australia's Conservatorium of Music where he studied with James Ledger and Dr. Christopher Tonkin. He holds a Bachelor of Music, a Bachelor of Arts (First Class Honours), and a Master of Music. He is also the recipient of various accolades including the inaugural Arcadia Winds Composition Prize (2018), Australian Postgraduate Award (2017), Rupert Thackray Prize for Music Education (2016), and Dorothy Ellen Ransom Prize for Composition (2014).

Holdsworth is a passionate advocate of music education and is involved in the development of resources for young Australians in partnership with institutions including the Tasmanian Symphony Orchestra and the Songbook Project.

Mark Holdsworth — current to May 2020