UPDATE 8 OCT: THE TWO 'COMPOSED NOISE' EVENTS WILL BE RESCHEDULED, DUE TO A DEATH IN THE FAMILY OF ONE OF THE MUSICIANS. DETAILS WILL BE ANNOUNCED AS SOON AS POSSIBLE.

Marcus Westbury, in his documentary 'What is Art?' tells the following joke: Q: 'What is the difference between a symphony orchestra and a covers band'? A: 'Nothing!'

The NOISE is definitively not trying to be another 'covers band'. We are a string quartet that began by improvising (for fun) in a little terrace house in Darlinghurst, creating our first album entirely out of semi-composed and improvised material of our own devising, without a 'cover version' in sight. 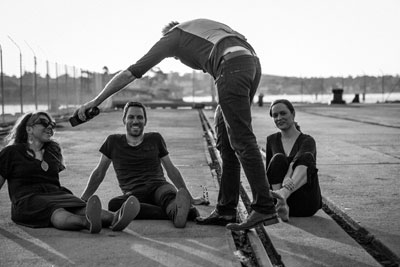 In 2013, the NOISE undertook an unusual and monumental project: to commission seven Australian composers to write seven new works for 'improvising string quartet'. The idea was to marry the NOISE's improvisatory, collective approach to music making with the singular and unique voice of a composer - hence the project's title: 'Composed NOISE'.

All were invited to compose a work that involved some sort of improvisation, or indeterminacy. The NOISE laid down a gauntlet to the composers, to not just 'think outside the box', but to actually reinvent the box, itself… a challenge that has been heartily embraced.

Amanda Cole's Ecliptica utilises 'light metronomes'. Andrew Batt-Rawden's score comes in the form of a live video, in which the notes appear in real-time, just before the musicians play them. Alex Pozniak's Force Fields ends with three minutes of random screaming feedback.

Andrew Ford's String Quartet no. 4 (commissioned thanks to the generosity of Julian Burnside AO QC) cleverly utilises the rhetorical ability of the string quartet to present four 'distinct but unified' voices, to examine the concept of individual versus group freedoms or voices. Taking this idea further, Ford has included in the score, a pre-recorded spoken word part (recorded and mixed by the NOISE) that the musicians are asked to imitate and interact with.

Lyle Chan has written a wonderfully quirky piece, Smoke Weather Stone Weather, the score of which is created anew every time it's played. The music is determined by a game of cards that the players take part in before picking up their instruments. And amazing jazz muso Paul Cutlan has beautifully combined traditional quartet writing (somewhat in the vein of Britten or Shostakovich) with jazz compositional techniques in his Merge/Emerge.

These seven commissions constitute the biggest single addition to our country's string quartet repertoire, and the NOISE hopes that other quartets, both in Australia and around the world, will start to play these works too.

To put the 'Composed NOISE' project in perspective, most major arts organisations and even many new-music groups commission only 2-3 new works in an entire year of activity. But thanks to the support of Vexations840, the Australia Council, Julian Burnside, and many smaller donors, the NOISE has commissioned, recorded and will now premiere all seven works over two historic nights in October (and launch the Composed NOISE double CD).

The NOISE is eternally grateful for all the support, and the wonderful creativity, of the seven composers.