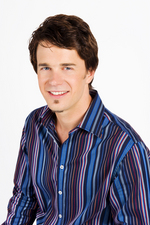 Composer Alex Pozniak (b. 1982) completed his Master's in Musical Composition at the Sydney Conservatorium of Music in 2008, with the assistance of a UPA scholarship and under the guidance of Matthew Hindson. During his undergraduate years at the University of Sydney (beginning in 2000), Pozniak obtained First Class Honours and the University Medal in 2005.

In 2009 Alex Pozniak was named composer-in-residence for the 2009 Verge Arts Festival at the University of Sydney during which he staged his first composer portrait concert, INFOCUS, presented by chronology arts, featuring eight works of both chamber and electronic music drawn from 2005-09.

Pozniak is Artistic Director of chronology arts, voted one of the top 100 Creative Catalysts in 2009 in the Creative Sydney arm of the inaugural Vivid Sydney Festival. He is Associate Lecturer in composition at the University of Sydney's Music Department, teaches composition at the Conservatorium High School and the McDonald College and is a board member of the New Music Network and the Aurora Festival.