Nigel Westlake and Elliott Gyger have emerged as winners of the 2013 Paul Lowin Prizes from an extremely strong field of entries.

Westlake won the Orchestral Prize ($25,000) with his powerful Missa Solis - Requiem for Eli (2010) for symphony orchestra, chorus and male treble solo. Gyger's winning work in the Song Cycle Prize ($15,000) category was giving voice (2012), a cycle of eight songs for mezzo-soprano and ensemble, based on Australian female poets' words about early childhood and parenthood. The winners were announced on Monday evening 28 October in a special ceremony at APRA headquarters in Sydney. 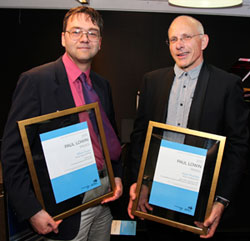 The 2013 Paul Lowin Prizes attracted the highest-ever number of entries in both categories, with 55 entries for the Orchestral category, and 48 for the Song Cycle category. The judging panels found the overall standard of works extremely high. In addition to Westlake's work, finalists for the Orchestral Prize included Brett Dean (The Last Days of Socrates), Andrew Ford (Blitz) and Mark Isaacs (Invocations). The Song Cycle Prize finalists were Elliott Gyger (giving voice), Ross Edwards (Five Senses) and Andrew Ford (Willow Songs).

The Paul Lowin Prizes, held every second or third year, are presented by Perpetual as Trustee for the Paul Lowin Trust, and administered by the Australian Music Centre. Independent juries are convened from representatives of the Australian music community, and include composers, performers, artistic directors, conductors, and critics. The judges in 2013 were Nigel Butterley, Brett Kelly and Peter McCallum in the Orchestral category, and John McCaughey, Roland Peelman and Sally Whitwell in the Song Cycle category. Both panels were chaired by Gwen Bennett.

'Paul Lowin's generosity and foresight in establishing a trust in perpetuity will continue to encourage musical composition in Australia - ensuring Australian composers give expression to Paul's passion for generations to come. I would also like to express my appreciation to the judges who undertake the extremely difficult task of assessing the many applications. Without their efforts these awards would not be possible'. stated Andrew Baker, State Manager NSW & ACT for Perpetual Private.

Since their establishment in 1990, the Paul Lowin Prizes have awarded over $370,000 in prizes.

'This is a distinguished and masterly work, deeply felt and with great impact. It lives up to expectations in creating a compelling sense of occasion. Big gestures written for large orchestra and choir contrast with intimate gestures, such as the poignant, delicate writing for the treble soloist. This work drew impressively on the composer's musicianship and wide experience, demonstrating consistent abilities to handle large and diverse forces and consistent abilities to evoke a particular mood or response. One cannot help but be affected by this passionate music.'

giving voice is a sophisticated yet playful work in which words are both the beginning and the end, the creative germ and the eventual sound construct. The text is unusual and boldly chosen, based on the notion of verbality itself, with eight poems that embrace babyhood, the formation of words, speech, and poetic images. These are articulated in vocal lines of eloquence, independence and varied character, set among the larger ensemble rhythm of five instruments in ever-changing combinations, with their own independent manners of 'speech'. The great technical accomplishment of this composition draws in a truly individual way on a vocal-chamber tradition reaching back to the cantatas of Bach and forward to the song-cycles of Elliott Carter. This piece is innovative, effective and impressive, even theatrical. A striking work.'