Selleck's compositional style draws upon diverse tonal and atonal influences She devotes much of her time to environmental causes and the idea of ‘connectedness’, particularly between humanity and the environment, is a theme in many of her compositions. 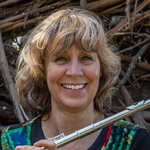 Johanna Selleck (born 1959) is a composer, flautist, and musicologist. She holds a PhD in composition from the University of Melbourne, where she is an honorary fellow. She also teaches flute and composition at Presbyterian Ladies' College (Melbourne). Her compositions have been performed in Australia and overseas including in South Africa, Malta, Israel, Italy, Singapore, Vietnam, Japan, Hong Kong, and the USA. Current commissions include a string orchestra piece for performance at the 2022 PUENTE Festival Interoceánico in Chile.

In Australia, Selleck's works have been performed by the Melbourne, Queensland, and Tasmanian Symphony Orchestras. She has composed across a wide range of genres and styles including orchestral, opera, chamber, choral, and electroacoustic music. These include works performed by some of Australia's most highly regarded performers (such as soprano Merlyn Quaife, pianist Michael Kieran Harvey, and shakuhachi master Anne Norman) and chamber groups (including Astra, the Song Company, the Australian Contemporary Chorale, and Silo String Quartet). Johanna is a regular participant at festivals and conferences in Australia and internationally. In October 2012, her flute concerto, Unspoken Dialogues, was performed by the Israel Chamber Orchestra at the opening concert of the 30th Asian Composers' League Festival in Tel Aviv, Israel. She is also a regular contributor (as performer and composer) to Melbourne Composers' League concerts.

Selleck's research (including cultural history, multimodal discourse, and semiology) is widely published including by Cambridge Scholars Press and Lexington Books and in scholarly journals such as Australasian Music Research and Context. Upcoming publications include book chapters in publications by Hollizer Verlag (Vienna) and another by Palgrave Macmillan (London). Her compositions are published by Reed Music, Lyrebird Press, Allans, Hal Leonard, the Centre for Studies in Australian Music, and the Australian Music Centre. Her recordings appear on labels including Move Records, Tall Poppies, Fluteworthy, Navona (USA) and Albany Records (USA). Prizes for composition include the Herbert Maggs Award and the Percy Grainger Prize for Composition.

Johanna Selleck — current to May 2021