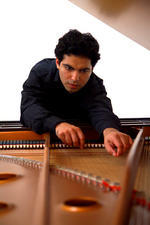 Piano virtuoso Zubin Kanga returns to Sydney to perform works by some of Australia´s most significant composers. Celebrating six generations of Australian music, 'Generations' features recently commissioned works written for Zubin by Elliott Gyger, Daniel Rojas and Nicholas Vines, all featuring new and innovative techniques and sounds from the piano.

The concert also features works by Ross Edwards, Alex Pozniak and Nigel Butterly’s Forest I, featuring James Eccles, viola. The concert is the final event of Zubin Kanga’s artistic residency at Sydney Grammar School and all the composers in the program have connections with the school, either as former students, composers-in-residence or staff members.

The performance will feature the world premiere of a new work by Phil Jameson, a talented Grammar HSC student.

Pianist Zubin Kanga, has worked closely with many of the world’s leading composers including George Benjamin, Michael Finnissy, Howard Skempton, Beat Furrer, Elliott Gyger and Liza Lim and performs with some of Australia’s leading new music ensembles, including Ensemble Offspring and Halcyon as well as ensembles in Europe including the Kreutzer Quartet and the London Sinfonietta, with whom he made his debut as soloist in January alongside Rolf Hind performing Beat Furrer’s Nuun for two pianos and orchestra. He was recently awarded the Michael Kieran Harvey Scholarship, as well as the Best Newcomer Award at the 2010 ABC Limelight Awards.

Further information for this event is available online at the event's website or by email to zrkanga@gmail.com