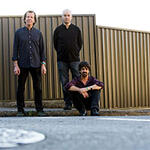 One of the most distinctive and spellbinding units in Australian improvised music, the ARIA-nominated Alister Spence Trio have gained worldwide recognition for their ingenious compositions and magnetic live interplay. Together they create luminous soundscapes that are dark, lyrical, textured, and endlessly surprising.

The band has been twice nominated for an ARIA Award (Best Jazz album 2004, 2007), and an APRA/AMCOS Art Music Award (Excellence in Jazz, 2016). Not Everything but Enough was voted by Music Magazine, Japan, in the top 10 jazz releases worldwide for 2017.

Over more than 20 years, the Alister Spence Trio have built a distinctive world of sound based around Alister’s compositions, establishing a strong national and international reputation, with performances including Tokyo International Jazz Festival, Montreal and Vancouver International Jazz festivals, and Vivid Festival Sydney (curated by Brian Eno, 2009).