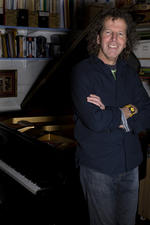 Pianist and composer, Alister Spence has established a reputation as a pre-eminent creative force in jazz and improvised music in Australia and beyond.

Throughout a career spanning more than 25 years, he has performed with and composed for some of the world's finest musicians in contemporary music and improvisation.

The Alister Spence Trio - featuring Lloyd Swanton (The Necks) on double bass and Toby Hall (Mike Knock Trio) on drums and glockenspiel - has enjoyed critical acclaim, being nominated twice for Best Australian Jazz Album at the ARIA Awards (2004/2007) and for an APRA/AMCOS Art Music Award (Excellence in Jazz, 2016). Their 7th release, Not Everything but Enough was voted in "top 10 Jazz Albums 2017" in Music Magazine, Japan and received "Honorary Mention, Best of 2017' in the New York City Jazz Record. The trio have built a distinctive world of sound based around Alister's compositions; establishing a strong national and international reputation, with performances including Tokyo International Jazz Festival, Montreal and Vancouver International Jazz festivals and Vivid Festival Sydney (curated by Brian Eno 2009).

Alister has established creative collaborative relationships with internationally recognised improvisers in Japan, Scotland, Sweden and the US. Since 2008, he has toured and performed with acclaimed Japanese pianist/composer Satoko Fujii in Japan, Australia, the US and Canada. In 2018, they released three CDs together, including Bright Force (Libra Records), which was described as 'awe-inspiring music' 4.5stars (allaboutjazz.com).

Alister has also recorded and toured for many years in Europe, Australia and Japan with Scottish, saxophist, Raymond MacDonald. They have released two improvised music albums as a duo, and three as 'Sensaround" an electro-acoustic open-improvisation trio with Australian guitarist/electronic musician Sia Ahmad.

in 2014, Alister's improvised piano-duo album, Everything Here is Possible with US pianish Myra Melford received an APRA/AMCOS Art Music Award; and his improvised music trio with Swedish musicians Joe Williamson and Christopher Cantillo was nominated for the same award in 2015.

Alister Spence has also composed much music for film, working for acclaimed directors such as Tom Zubrycki, Allan Collins, Tom Murray and Ivan Sen. Together Spence and Ivan Sen wrote and recorded the soundtrack to Sen's first feature film, Beneath Clouds, first screened in June 2002. The score for Beneath Clouds was nominated for the Best Score at the Film Critics' Awards, and the Australian Film Industry Awards 2002.

Spence's playing is featured on more than 30 CDs, many of which have won or been nominated for an ARIA Award. His wide-ranging talents have led to performances with many musicians across the contemporary music spectrum, from the Australian Art Orchestra to Ed Kuepper, the Laughing Clowns and Paul Capsis. Over the years he has played with many of the finest musicians in Australia including Bernie McGann, Sandy Evans, Chris Abrahams, Dale Barlow, Ruby Hunter and Archie Roach, Tony Buck, Phillip Slater, Mark Helias (US), Barre Phillips, Andy Sheppard (UK)and Jim O'Rourke.

Spence has toured extensively in Europe, Asia and North America over the last 20 years with the Alister Spence Trio, Clarion Fracture Zone, Wanderlust and the AAO, performing at many of the world's premier jazz festivals and clubs, and on radio broadcasts for ABC, BBC, and WDR (Germany).

Alister is a Doctor of Philosophy, University of New South Wales where he is a Lecturer in Music