The Australian music industry celebrated the success of the year’s most outstanding Australian classical music achievements at the 2008 Classical Music Awards on Monday 21st July 2008. The Awards were presented by APRA and the Australian Music Centre, at The Playhouse, Sydney Opera House. 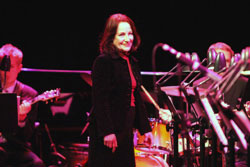 Australian jazz pioneer, Judy Bailey (pictured), received the award for Distinguished Services to Australian Music. This prestigious award recognises her enormous contribution to Australian new music through her role as a mentor, composer and educator. Dick Letts’s distinguished career as an arts manager and advocate of Australian music was recognised with the presentation of the Long-Term Contribution to the Advancement of Australian Music. Colin Bright picked up the award for Best Composition by an Australian Composer for his dramatic work The Last Whale; a topical piece that connects recorded whale sounds with live instrumental and vocal ensemble. Clarinetist Catherine McCorkill and the Australia Ensemble took out the award for Best Performance of an Australian Composition for a performance of Nigel Westlake’s Rare Sugar. Tura New Music was awarded the , winner of the Outstanding Contribution by an Organisation Award.

Two of the three prestigious Work of the Year awards were ethereally inspired: Ross Edwards and Fred Watson for Symphony No. 4 Star Chant won the vocal/choral award; and Stuart Greenbaum took out the orchestral award for 90 Minutes Circling the Earth. The award for Instrumental Work of the Year went to jazz pianist and composer Mark Isaacs for Walk a Golden Mile.!

Works of the Year

Vocal/Choral Work of the Year

Best Composition by an Australian Composer

Colin Bright for The Last Whale

Award for Best Performance of an Australian Composition

Outstanding Contribution to Australian Music in a Regional Area

Outstanding Contribution by an Individual

Ian Munro for his contribution to Australian performance and composition in 2007.

Outstanding Contribution by an Organisation

Tura New Music for its 2007 festival and touring program, and its advocacy and support in Western Australia.

Long-Term Contribution to the Advancement of Australian Music

The ACT panel has selected Nicole Canham, Artistic Director, and Pro Musica Inc, for the 2007 Canberra International Music Festival. The panel would like to especially cite the Artistic Director in the award, recognising her role as the driving force in developing the Festival's vision and broadening its community of interest and participation, as well as promoting the performance of new repertoire and building a significant education program.

The New South Wales panel has selected Damien Ricketson's, So We Begin Afresh. The work is indicative of the composer's enquiring mind. The piece is about imagination and this is achieved in an exciting way both intellectually and aurally. It employs an interesting underlying structural technique and overall illustrates the high quality of his compositional craft and confirms his individual creative voice.

Stephen Leek’s work Cries and Whispers impressed the panel as an outstanding work as did his overall contribution and commitment to the community. It is well-crafted, especially suited to the peculiarities of the vocal medium, indicative of a vivid creative imagination and is a thoroughly engaging and professional rendering of the text. Stephen Leek has contributed a great deal to musical life in Queensland and this award not only recognises his ability as a composer, but also acknowledges this sustained commitment.

The Victorian panel has selected Mark Pollard for his Long-term contribution to the advancement of Australian music in Victoria over the past 27 years; as a musician, composer and educator. Mark’s compositional output has explored many different genres and he has worked across genres with other artists including film makers, actors, directors, choreographers, dancers and curators of community activities. His work as an educator spans two decades and he has contributed to curriculum development and promotion of composition as a lecturer, external adviser and committee member at a state and national level.

The West Australian panel has unanimously selected Tura New Music for the 2008 State Award. Tura New Music not only recognises and encourages the work of adventurous Australian composers and those from elsewhere, but also offers local musicians opportunities for performance that they might otherwise not have enjoyed. Tura New Music is organised most efficiently and with professional skill and enthusiasm.

• State/Territory Awards for Tas, SA and NT were not awarded this year.