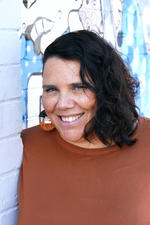 Nardi Simpson is a Yuwaalaraay writer, musician, composer and educator from NSW's North Wast freshwater plains. A founding member of Indigenous folk duo Stiff Gins, Nardi has been performing nationally and internationally for the past twenty years.

She is the current Director of the Sydney Conservatorium of Music's Barayagal Choir and participant in Ngarra-Burria - First Peoples Composers program.

Her debut play Black Drop Effect will premiere at the 2020 Sydney Festival, and her debut novel, winner of 2018 Black&Write! Indigenous Writers Fellowship - Song of the Crocodile is due for release with Hatchette Australia in September 2020.

Nardi is a Gamilaraay language teacher and cultural consultant heavily involved in the teaching and sharing of culture, story and language in both her Sydney and Yuwaalaraay communities.