I believe music must aspire to be free in every possible sense of the word. 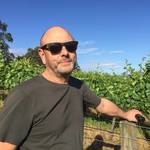 His prolific compositional output consists of solo pieces, chamber works, orchestral compositions, works for music theatre, vocal works, concept pieces, electroacoustic and electronic works. His music has been performed, broadcast and recorded in many countries, and by some of the leading exponents of contemporary music. His works are published with Ars Publica (Italy), Alexander Street Press (US), and the Australian Music Centre. Recordings of his music are released on several CDs and have received critical acclaim.

In 1996 he was awarded the Doctor of Philosophy at the University of Melbourne for his research into the semiotic nature of musical time. His book Semiotics of Musical Time was published in 2000 by Peter Lang Publishing in New York. He is the founder and artistic director of the Melbourne-based contemporary music project re-sound, which over the years has made a substantial contribution to the presentation, promotion and recording of Australian work.

From mid-2009 to the end of 2010 Thomas Reiner was appointed Acting Head of the Sir Zelman Cowen School of Music at Monash University, and in 2010 was promoted to Associate Professor. In 2007 he was awarded the Dean's Teaching Award for excellence in teaching, and in 2009 received the Dean's Commendation of Excellence in Teaching. In 2012 he received the Vice-Chancellor's Commendation for contributing to Monash University's commitment to social justice and human rights. At the end of 2018 he left Monash University to work as freelance writer and composer in Melbourne.

In 2014 his project Flayed Identities, which focusses on the involvement of Aboriginal soldiers in Australia's wars, received funding from the Australia Council for the Arts. The resulting multimedia work was performed at the Eel Festival at Lake Bolac in southwest Victoria, involving Rozalind Drummond, Kim Lajoie, Ted Lovett, Tiriki Onus, Tristram Williams, and Paul Williamson as main collaborators.

'If those other things involve to some extent the characteristics we find in Reiner's work, of intelligent exploration of music thinking, of theoretical knowledge carried lightly, of thoughtful humanity and generous engagement, then Australia's musical future will be in good hands.' (Alistair Noble in The Music Trust)

'Listening to this [Reiner's] music is a sensuous experience, but there are also contradictory elements that constantly question and provoke.' (Michael Hooper in Music Forum)