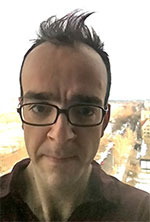 Anthony Pateras (b. 1979) is an Australian composer, pianist and electronic musician active in exploratory music since the late 1990s. His work explores multiple creative approaches including notation, improvisation, electro-acoustic performance and multi-disciplinary projects.

Pateras's larger pieces have been performed by the BBC Symphony, Los Angeles Philharmonic and Toronto Symphony, all conducted by Brett Dean. In 2007, he toured as a prepared piano soloist with the Australian Chamber Orchestra, performing his Autophagy at the Sydney Opera House. His extensive body of work for orchestral percussion has been commissioned and/or performed worldwide by Synergy, Speak Percussion, Vanessa Tomlinson, Diego Espinosa and the percussionists of the Basel Symphony.

Pateras was the recipient of an Ian Potter Composer Fellowship (2008), the Montalvo Artist Residency (2010), has represented Australia twice at the UNESCO Rostrum of Composers (2004, 2011), was a Myer Foundation Creative Fellow (2014-16), and with Valerio Tricoli, won the Giga-Hertz Produktionspreis from ZKM (2017). In 2018 he is a Fellow at Akademie Schloss Solitude in Stuttgart.

Pateras currently performs solo, in an electronic duo with eRikm, in the North of North improvisation trio with Scott Tinkler & Erkki Veltheim, and in various constellations with clarinetist Anthony Burr and composer Rohan Drape. Previous projects such as tētēma, PIVIXKI and Beta Erko have all explored the mutation of song form in various idioms.

Anthony has worked in film since 2000, having scored a number of short films by directors Pia Borg, Ben Hackworth, and Eron Sheean, as well as Sheean's feature Errors Of The Human Body (2011). These films have been shown at Cannes, Telluride, Toronto, Edinburgh, Berlin and Sundance Film Festivals. He also provided music to an experimental feature entitled The Man Who Disappeared (2015) by Sylvère Lotringer, which tells the story of Artaud's six weeks in Ireland.

He has released over 30 albums on Editions Mego, Ipecac, John Zorn's Tzadik and his own Immediata label, which features recordings with Chris Abrahams (The Necks), Jérôme Noetinger (Metamkine), Stephen O'Malley (Sunn O))) and his longstanding trio Pateras/Baxter/Brown. His label also features the 2nd and last album of the Thymolphthalein quintet, whose formation was commissioned by SWR2 Baden-Baden for the 2009 New Jazz Meeting.

Pateras finished his Bachelor of Music at LaTrobe where he studied composition with Neil Kelly and John McCaughey. At Monash under Thomas Reiner, he was awarded a Masters and PhD, which both researched the nexus of composition, free improvisation and electro-acoustic music.

Biography provided by the composer — current to March 2018

- Article: Music to put a smile on your dial

- Article: Off the beaten track