Compassion and Empathy directed towards all life can save us. To this end, art has the potential to act as a guide. 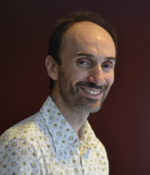 Calogero Panvino was born in Sydney in 1972. His school years were almost totally devoid of any musical training, and it was not until he started university (enrolled in a science degree) that he started taking an interest in classical music. It was around this time that he also started to learn to read music and play the piano.

Having completed the science degree, Panvino entered the workforce. However, a couple of years later he returned to Sydney University where he completed a Bachelor of Music Degree and a Master Degree in composition. His principal teachers were Kirsty Beilharz, Ian Shanahan and Bozidar Kos. During this time he was awarded the Doris Burnett Ford Scholarship for composition, and the Italian Government Scholarship, Albert Travelling Scholarship and Sydney Moss Scholarship, which enabled him to carry out research in Italy on the music of Giacinto Scelsi.

Panvino's music making begins with a source of inspiration such as Nature, another work of art or a social issue. Because of his background in science and maths, he often explores the musical possibilities of patterns, numerical sequences and algorithms. However, he also craves a purely emotional language that he finds impossible to accurately explain using just words or formulas. Consequently, the music he writes often contains a tussle between intense emotions and the rigour of maths; instinct versus intellect.