Learning about the source of the energy that sets events in motion is the essential purpose of the composer's work. 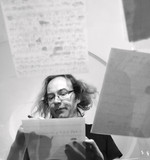 Dr Dominik Karski is an independent Polish/Australian composer, whose body of work is informed by close collaboration with distinct interpreters of new music. Ensembles and soloists who have worked with the composer and presented his works include Flute o'clock, Malgorzata Walentynowicz, ELISION Ensemble, Quatuor Diotima, Karin Hellqvist, Anna Petrini, and Ensemble SurPlus, among many others.

In his composing, he focuses essentially on the player-instrument relationship as the primary source of the musical substance. CDs with his works have been released in Australia, Austria, Canada, Poland, Sweden, and UK; of particular importance is a monographic disc with the composer's flute works recorded by Flute o'clock and released in 2016 in Poland.