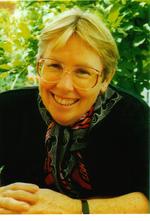 Moya Henderson (b. 2 August 1941) graduated from the University of Queensland with first class honours in December 1972. Her first professional appointment came the year after her graduation when she was appointed resident composer to the Australian Opera during its inaugural season at the Sydney Opera House. Towards the end of that year she was awarded a DAAD Scholarship and a travel grant from the Music Board of the Australia Council for the Arts, which enabled her to continue her musical education in Germany. While in Germany she studied with Mauricio Kagel and Karlheinz Stockhausen at the Cologne Musikhochscule.

Henderson returned to Australia at the end of 1976 and settled in Sydney, teaching composition as a part-time lecturer at the University of Sydney. She became resident composer in the Department of Music there in 1978 and, over the three-year span of her appointment, worked to stimulate the interest of students in music-theatre, and to encourage them to create their own music-theatre compositions.

In September 1983 Henderson's work for organ and pre-recorded tape, Sacred Site, was given its first performance in the Concert Hall of the Sydney Opera House by David Kinsela. This work was commissioned by the Sydney Opera House Trust to celebrate the tenth anniversary of the opening of the Opera House, and Henderson believes that it holds a seminal place in her compositional output.

Moya Henderson's work as a composer has also led her into the field of instrument design. While in Germany in the mid-seventies she received a commission from the sculptor Helfried Hagenberg to compose music to be played on a sculpture he had created from twenty-seven triangles. The sound she discovered during the course of completing this commission led her to research and eventually develop the alemba, a keyboard percussion instrument. The first prototype of this instrument was created in 1983, with the assistance of grants from the Federal Department of Science and Technology, the A.S. White Trust and the Myer Foundation. She was awarded one of the inaugural CSIRO Artist-in-Residence Fellowships in November 1983, and another residency in 1986 enabled her to work on an improved fine-tuning of the bass alemba. Treble and bass alembas have been used several times by the Sydney Symphony Orchestra, and Henderson has continued to work to perfect the instrument's design.

Henderson is also the inventor of the Tosca Bells, another instrument created with the assistance of the CSIRO. She also developed the 'noose' for stringed instruments, which enables the composer to write 'natural' harmonics on virtually every note within the range of the string orchestra. The first work to make use of this invention was Henderson's The Dreaming, composed to a commission from Musica Viva for the Australian Chamber Orchestra.

Moya Henderson has received many commissions from a variety of organisations, performers and ensembles such as the Australian Broadcasting Corporation, Musica Viva, West German Radio, Macquarie University, Helen Noonan, David Kinsela, the Australian Youth Orchestra, and Perihelion. In 1989 she was awarded the Don Banks Fellowship for 1993 and was appointed Macgeorge Fellow with the University of Melbourne's Music Department for the first quarter of 1995.

Henderson's opera, Lindy (1997), based on the Azaria Chamberlain case, received its premiere by Opera Australia at the Sydney Opera House in October 2002.

Biography provided by the composer — current to January 2007

- Article: Cry of the earth

- Video: I lost a world the other day, by Moya Henderson

- Video: I lost a world the other day, by Moya Henderson