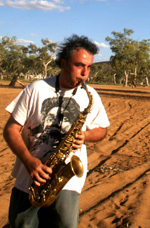 Jim Denley was born in Bulli, Australia in January 1957. Wind instruments and electronics are core elements of his musical output.

An emphasis on spontaneity, site-specific work and collaboration has been central to his work. He sees no clear distinctions between his roles as instrumentalist, improviser and composer.

Collaborations, his radio feature for the Australian Broadcasting Corporation, won the Prix Italia in 1989. His interest in radio has continued with the ABC over 17 years. In May 2006 he recorded a program for the ABC in the Budawang Mountains, south-west of Sydney, which has now been made into a CD, Through Fire, Crevice and the Hidden Valley. This received an Honorary Mention in the Digital Musics category of the Prix Ars Electronica 2008. He has been to the Budawangs again to record a new program for the ABC, Co-existence. The ABC will enter the 2006 recordings in Prix Italia 2009.

In 1990 he was a member of Derek Bailey's Company for a week of concerts in London. He co-founded the electroacoustic text/music group Machine for Making Sense.

In 2006 and 2007 he received a Fellowship from the Australia Council for the Arts to research and develop his concept of Meta instrument. As part of this he formed the group Metalog - they toured Australia July 2008.

With MURAL, (Kim Myhr and Ingar Zach) he will play at the Rothko Chapel in Houston in March 2010.

'This is music at it's most primal, enhancing the beauty of creation.' (John Shand - Sydney Morning Herald).