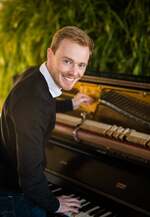 Angus Davison composes music with 'bright energy' (Limelight), 'considerable poignancy' (The Mercury), and 'a respect for sound in itself' (Cut Common). His music explores the place of humans in nature, inviting listeners to deepen their fascination for the world around them. Recent works have explored topics such as the religious life of worms, the absence of majestic views, thermonuclear fusion, and Newton's laws of motion.

Angus completed a Master of Music at the Sydney Conservatorium where he also attained First Class Honours following a Bachelor of Music at the Tasmanian Conservatorium. His awards include the Don Kay Scholarship, an Honours Scholarship, a Research Training Program Stipend, the Tasmanian Symphony Orchestra Student Composition Prize, Audience Choice Award at the 5th International Tampa Bay Symphony Orchestra Prize, and second place in the Jean Bogan and Willoughby Symphony young composer awards.

He has been selected for composer development programs including the Tasmanian Symphony Orchestra Australian Composers' School, the Melbourne Symphony Orchestra Cybec Program, the Ensemble Offspring Hatched Academy, the Omega Ensemble CoLAB Program, and Composing in the Wilderness.

Angus' music has been performed in Australia, Europe, and the US. Performers and commissioners of his work include the Melbourne and Tasmanian Symphony Orchestras, Ensemble Offspring, Corvus, the Ady Ensemble, Omega Ensemble, Barega Saxophone Quartet, and Michael Kieran Harvey among many others.

Angus is also a music educator, arts administrator, conductor, and pianist. Based in Sydney, he teaches classes in music theory and history at the Sydney Conservatorium of Music.