I write music out of necessity; it's my most direct form of communication. If "a picture is worth a thousand words", a piece of music is surely worth MANY thousands. Above all, music must have meaning... 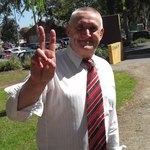 Philip Czaplowski was born in London in 1958, but has lived in Melbourne, Australia since 1969. He studied music at Melbourne and La Trobe Universities, before completing a PhD in music composition at Monash University in 2007. In 2005 Czapłowski also attended the Academy of Music in Kraków, Poland, where he studied with Zbigniew Bujarski, Krystyna Moszumañska‐Nazar, Wojciech Widłak, and Anna Zawadska‐Gołosz.

- Document: Concerto for oboe and strings