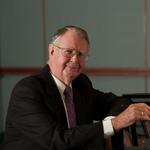 While enrolled in the Bachelor of Music Course at the Conservatorium of Music, he began to develop an interest in composition

A suggestion from the conductor Verdon Williams, that he should write something for solo instrument and orchestra, resulted in his first work to receive a professional performance: Romance for Oboe and Strings was performed on radio by the Jiri Tancibudek with the Melbourne Symphony Orchestra in 1954.

On graduating from the Melbourne University Conservatorium of Music, Colin Brumby was appointed Music Master at Sunshine High School. After teaching for three years, however, in 1959 he decided to head north to Queensland where he was promptly appointed a Junior Lecturer in Music on the staff of the (then) Kelvin Grove Teachers' College

In 1962 he left to take up a scholarship awarded by the Spanish Government to study advanced musical composition under Philipp Jarnach at an international music course in Santiago de Compostela, Spain. It was there that he met with fellow-Australian, guitarist John Williams, who suggested that Colin should continue on to London at the conclusion of the course in Spain.

Taking up John Williams's advice, he was appointed Head of Music at Greenford Grammar School, and studied composition privately with Alexander Goehr, resulting in his major orchestral work, Fibonacci Variations.

He returned to Australia in 1964 to take up a lectureship in the Department of Music at the University of Queensland. In the late '60s, at the invitation of the Queensland Division of the Arts Council of Australia, he composed several twenty-minute operettas for children, which were toured around the state where they were enjoyed by more than 70,000 children annually.

In 1972, he was awarded a Doctorate in Music by the Melbourne University, prior to returning to Europe for twelve months' further study in advanced music composition with Franco Evangelisti in Rome, Italy.

Because, however, of his increasing dissatisfaction with the prevailing atonal style of composition, he returned composing tonal music in The Phoenix and the Turtle, a work written in response to a commission from Musica Viva for the 1974 Australian tour of the Academy of St Martin in the Fields under Neville Marriner.

This work marked a lasting change of compositional style for Brumby, who said at the time, 'I became convinced that the atonal style of composition attempted to elevate gibberish to an art-form, and that I wanted no further part in it.'

The immediate appeal that his extremely large musical output makes to performer and listener alike means that he is one of Australia's most frequently broadcast and performed composers.

Colin Brumby passed away in Brisbane on 3 January 2018.

Book: A discussion of two major choral works by Colin Brumby based on texts by Thomas Shapcott / by Philippa Roylance.