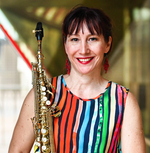 Beaugeais recently graduated with a PhD in Composition at the Sydney Conservatorium of Music on the dual role of a composer-performer and new saxophone music by Australian composers. Her research is featured in Vandoren Paris, LA-based Voyage KC and Clarinet and Saxophone Society of Great Britain magazine.

Katia Beaugeais — current to May 2022