a new musical adventure for children

A book written in extreme circumstances, The Happiness Box has a special place in Australian children's literary history. The story, which involves three animal friends journeying through the jungle on a quest to discover the secret of happiness, is an enduring message of tolerance and triumph over adversity.

On 8-11 May, the Melbourne Symphony Orchestra will premiere a new orchestral work for children, based on The Happiness Box (for details, see the AMC Calendar 8-10 May and 11 May). Bronwyn Lobb chats to composer Bryony Marks about capturing the book's sense of wonder, trepidation and delight in music.

Bronwyn Lobb: The Happiness Box is a really special story on so many levels. Tell us a bit about the book and its history.

Bryony Marks: The Happiness Box has the most unusual and inspiring genesis. It was written by David Griffin and illustrated by Leslie Greener in thirty-six hours while they were prisoners of war at Selarang Barracks, Changi, in the lead-up to Christmas 1942. The Allied POWs had discovered that there were women and children incarcerated down the hill in Changi Gaol, so they asked permission of the Japanese Guards to make Christmas presents for them. Most men made model toys, but Griffin didn't think he was much good at that sort of thing, so he wrote The Happiness Box instead. 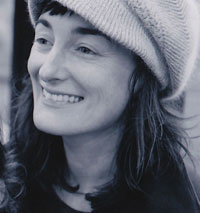 My understanding is that when General Saito inspected the toys, he flew into a rage at the book, because of the name of one of its main characters - Winston, the chi-chak lizard. Thinking the book contained code for the prisoners, he ordered it be destroyed. However, without Griffin's knowledge, his fellow POWs managed to hide it in a cordite container for the remainder of the war. When the POWs were liberated, Griffin was presented with the book, brought it back to Sydney where it was published with Greener's magical illustrations by the Australasian Publishing Company in 1947, and again by Media Masters in Singapore in 1991.

It was after a conversation with conductor Brett Kelly, during which he pointed to the scarcity of Australian orchestral works for children, that I went on the hunt for a singular fairy tale and found The Happiness Box. It was featured in an exhibition presented by the National Library of Australia entitled 'National Treasures'. I was immediately captivated by the larger story; the gentle morality tale of the three best friends on a journey resulting in the discovery of the secret of happiness; even the title of the book itself. It was obvious I had found the right Australian story.

The estates of David Griffin and Leslie Greener were kind enough to give me approval to adapt the work into a structure suiting its new incarnation. Symphony Services Australia, Father Arthur E. Bridge AM and the Melbourne Symphony Orchestra have generously provided the commission and premiere performance opportunities respectively. It is extremely exciting to be involved in bringing this story to a new generation of children, seventy years after its creation, and I believe its themes to be as relevant today as they were then.

BL: Have you found your approach to this composition to be different to that of your other compositions, and if yes, why?

BM: Yes, very different. Since the birth of my eldest son eight years ago I have been writing music for film and television exclusively. The relatively short length of music cues has been advantageous, as my writing studio is in my house, and even with a babysitter present there are constant interruptions. Obviously, it is important that film music blends seamlessly into the fabric of a film. Sometimes, in my opinion, the best film music is felt rather than heard. Of course, The Happiness Box puts the music on an equal footing with the narrator, and a great deal more time was spent on very particular nuances.

The interplay between the narrator and orchestra structurally underpins the work. Though I have written for spoken voice before in my chamber opera, Crossing live, (which was performed by Chamber Made in 2007), in The Happiness Box the narrator really parries with the orchestra. So it is fortunate that we have secured Stephen Curry as our narrator, as he is one of the most quick witted, vaudevillian performers I have seen.

BL: There are a number of characters introduced in the book - how have you chosen to represent them musically?

BM: Winston the chi-chak lizard is represented by darting oboe and glockenspiel; Martin the monkey, by pizz bass characterised by wide ranging glissandi with muted trumpets; Wobbley the frog, by tuba and guiro. The wind motif is signified by piccolo, flute, ocean drum and air noise; Bumble the Bee, solo viola; Dreamy Bill the turtle, solo cello; birds, harmonic strings - I could go on, but that's probably too much information already...

The Happiness Box
Based on the book by David Griffin
Music by Bryony Marks
Illustrations by Leslie Greener
Narration by: Stephen Curry.
Iwaki Auditorium, ABC Southbank 8-11 May 2013
For all event details and ticket information, see the AMC Calendar 8-10 May and 11 May.