Julian Yu and Damian Barbeler at the 2012 Four Winds Festival

Four Winds Festival, held every other year at Easter in Bermagui on the South Coast of NSW, is an intimate three-day festival showcasing Australian and international musicians. In 2012, the festival celebrates its 21st anniversary with the launch of a new, permanent 'Sound Shell' - the first stage in developing a festival site, made possible through a regional development grant, state arts grant and a community fundraising campaign.

The festival, led by the recorder virtuoso Genevieve Lacey, won the Award for Excellence in a Regional Area in the 2011 Art Music Awards. This year's festival takes place on 6-8 April with the theme 'Music that Soars', and includes five world premieres. We asked two of the composers, Damian Barbeler and Julian Yu, to tell us about their new works. [Updated 24 February - link to the ABC South East NSW video interview with Barbeler.]

Damian Barbeler's new work, Bright Birds for two pianos, was commissioned by Cliff Wallis and Sayaka Mihara, whose 100-acre property, 'Watery Fowls', is recognised as one of the best locations for birdlife on the South Coast, with more than 140 recorded species. Barbeler made several visits to the property to immerse himself in the location, and Bright Birds is a result of his emotional response to the landscape and its inhabitants, particularly the resident birds.

You made numerous visits to Bermagui during the course of your residency - how many seasons did you experience there and how different was the environment each time?

Damian Barbeler: I went to Cliff Wallis and Sayaka Mihara's property at Wallagoot (an hour or so south of Bermagui) in autumn (Liquidambar turning yellow and red), spring (many birds) and more recently in summer (quiet, dry; Satin Bowerbirds stealing grapes on the verandah). The spring visit most influenced the new work, Bright Birds. Cliff and Sayaka's property attracts huge numbers of diverse species, being a conservation reserve and because of the vast plantings they have undertaken. During walks along the length of the property next to Lake Wallagoot you could see innumerable birds. Understandably they were in a high state of activity: the males in full spring colouring, singing and jumping around for all they were worth. There were fights and stand-offs high in the gums, and pairs flitting through the undergrowth. It was like the sounds and actions of the birds were articulating and amplifying the landscape with their songs, colours and spring-intensified interactions.

You have described your approach to this composition as 'painting in sound'? Can you elaborate?

DB: There are many connections to painting in the way I compose a work such as Bright Birds. I think in terms of shapes, gestures, textures and colours rather than melodies, accompaniments and harmonies. In landscape painting by, say, Arthur Boyd, his broad, rough paint strokes (sometimes applied with a palette knife or his fingers) give the paintings a jagged sensuousness; a fluid but dishevelled expressiveness which I believe captures his Australian (and in particular the Shoalhaven) landscape subjects perfectly.
My equivalent of Boyd's broad strokes is to scatter clouds of sparkling musical textures to suggest something of the mad exuberance of the birds at Cliff and Sayaka's place last spring.

In these large, sprawling musical shapes one can also hear suggestions of the curving Dromedary ranges and the Sapphire Coastline - as if the birdsong itself, as it rises and falls, is mapping out the dimensions and character of the region. Another inspiration I have taken from painting goes to subject matter and emotion. I love landscape works which, without fear or favour, explore human emotion most completely, especially in the context of the Australian landscape which can so often be at once devastatingly brutal AND intoxicatingly beautiful. In Bright Birds, therefore, once I established a birdsong, I was able to explore a wide range of contrasting emotions and moods: aggression following beauty, joy following wretchedness.

You recently rehearsed Bright Birds for the first time with Stephen Emmerson and Sonya Lifschitz (the pianists who will premiere the work at Four Winds) at 'Watery Fowls', the place that inspired it. How was it when all of those elements came together for the first time?

DB: When the players first went through the work they asked me to go for a walk, as it was the first time they had played the work through together and wanted to check some things before showing it to me. As I walked around I could hear snippets of the music floating across the property. Soon my ears started playing tricks on me. At times I would hear a bird call and think it was the pianos playing my piece. Sometimes the opposite would happen and I mistook a musical gesture for a distant bird. I was delighted by this experience. As I walked around, to my ears the music floated easily, even comfortably, through the landscape. 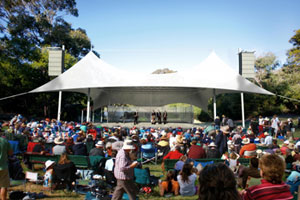 In fact this probably shouldn't have surprised me. In the preceding months, whenever I worked on Bright Birds, I would start by visualising the two pianists in the large glass-walled music room at Cliff and Sayaka's playing the piece. I should stress this was not a memory. I was creating the image for myself as a creative trigger. At these times I was able (in my imagination) to hear musical fragments or impressions of what they were playing. I wrote these fragments down and these became the basis for much of the work (in addition to the Grey Fantail call which I recorded during my real, not imagined, visits to the property). In this context, therefore, it should not be a complete surprise that the piece suits the landscape it was composed for.

Your work will have its world premiere in an open-air amphitheatre surrounded by spotted gums and birdsong - what dimension does the location add to the work?

DB: It is not only fitting that the piece be performed in the open air, but it was all part of the plan. I knew before I started the work where it would be performed and had visited the site. The work will be performed in the morning and this had a significant influence on how I structured the work, starting as it does with a dawn-chorus inspired section. The work is composed with the landscape in mind, and because the textures are constructed according to my own research into principles of nature and natural systems (such as fractals, self-similarity, emergent features), I believe any unexpected visits from living 'bright birds' could only enhance the piece.

The Eastern and the Western way

Ziyin and Carrillo Gantner have commissioned the Chinese-born Australian composer Julian Yu to arrange a series of pieces for this year's Four Winds. Yu has transformed classic tunes from the East (including 'Return of the fishing boat at dusk' and 'Three variations on cherry blossom') and the West (Pachelbel's Canon and Mussorgsky's Pictures at an Exhibition) using an unusual combination of instruments: violin, koto, and shakuhachi and string quartet.

The idea of this East-West fusion came from Ziyin Gantner who is, like Julian, culturally bilingual and equally at home with Eastern and Western classics.

Have you arranged for this unusual combination of instruments before?

Julian Yu: This is the first time that I have ever written for koto and shakuhachi. Some of my previous pieces were arranged for the Chinese version of the koto, called zheng. But the zheng is easier to write for as it has a wider range and more scope for bending the pitch (up to a 3rd interval). Also, the koto sounds softer than the zheng.

Is the audience expectation different when you are working with classics as opposed to new compositions?

JY: When listening to contemporary music, most audiences do not know what they are going to hear. If the music is totally unfamiliar and they have nothing to relate it to, it is much harder to enjoy.

The Eastern way of listening is very different to the Western way. When Chinese people listen to their own traditional music, they listen for the differences from one performance to another. The more embellishment and ornamentation the performer puts in, the better they like it. But the Western way is that the performer should play exactly as the composer has written, and a new piece is supposed to be totally original (which is actually impossible since we are always building on what has gone before). I hope that on hearing my modified classics, listeners will be open-minded enough to allow themselves to be moved by the divergences rather than being upset by them.

The artistic director of Four Winds, Genevieve Lacey, has praised your 'beautiful ear for colour'. For you, are there different ways of listening for the colour in Eastern tunes as opposed to Western compositions?

JY: This is such a nice comment. Certainly the two ways are different. Western music is more vertical, chordal and contrapuntal, whereas Chinese music emphasises the melodic and heterophonic aspects. As I said, Chinese listeners like to concentrate on the embellishments that give new life to a melody that they already know, so the different timbres and varying ways in which the sound is produced on different instruments are of particular importance.

Is there a particular pressure when the person who commissions your work has a fluency in or passion for the area of work?

JY: If I let this influence me too much I wouldn't be able to compose. So I try not to worry about what the commissioner will think of the work, and just get on with whatever it is I am doing - let fate play its role.

Is there a difference in the way you approach arranging, as opposed to composing?

JY: For me, arranging is composing too, but it just depends on how much freedom you are going to take. I once wrote an article about 'levels of freedom in orchestration'. Strict arranging with no changes apart from the instrumentation is the most basic level. The more you diverge from the original piece, the closer you come to writing a new piece. It is all a matter of degree.

© Australian Music Centre (2012) — Permission must be obtained from the AMC if you wish to reproduce this article either online or in print.

The Australian Music Centre connects people around the world to Australian composers and sound artists. By facilitating the performance, awareness and appreciation of music by these creative artists, it aims to increase their profile and the sustainability of their art form. Established in 1974, the AMC is now the leading provider of information, resources, materials and products relating to Australian new music.