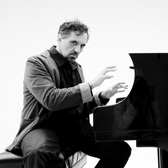 A musical polyglot, Joe Chindamo draws praise as "the most prodigiously talented pianist of his generation" (David James), and a "model of the complete musician of Bach's time" (Anna Goldsworthy). To date, he has 23 records under his belt, has performed at international venues such as the Tokyo Dome and New York's Lincoln Centre, and lists supporting Dianne Reeves and performing for Australian Prime Minister Kevin Rudd as some of his career highlights. Wherever he goes, whether he's working in jazz, orchestral, chamber or film music, it seems that sparks of creativity and inventiveness follow.

In May, the Adelaide Symphony Orchestra will be performing the world premiere of his latest work, Ligeia. Here, we chat to him about the work, writing for the trombone, and the what projects he is working on next.


Tell us about your new work, Ligeia. What were your primary sources of inspiration and what ideas did you work to express musically? Moreover, were there any Australian musical influences in the work?

Ligeia - Concerto for Trombone and Orchestra channels the world of Edgar Allen Poe - hence the title - and deals with the nature of duality, or the double, a recurring theme in the writer's Gothic tales of mystery and the macabre. This ties in with Jung's idea that one wears a mask to convince themselves and others that they are not an altogether bad person, which is also the central theme in Poe's "The Tell-Tale Heart".

As Jung explained, one cannot go beyond the persona - or mask - until they have incorporated into their character those darker traits which belong to what he called the "shadow self".

The work itself, in three movements, is highly energetic - even quite wild at times - and virtuosic, for the orchestra and soloist alike.

Throughout, there are quasi-operatic passages, full of drama, tempered by an eerie tender lyricism, as exemplified in the recurring Ligeia waltz (which first appears in the second movement).

It was a long standing Austrian/German/Catholic tradition to use the trombone in settings of Requiem mass and composers such as Mozart employed it as a portent of death, thereby making the instrument a perfect narrator for such themes, a characteristic I have reflected in this concerto.

In this work however, the trombone's bandwidth extends well beyond the funereal. Here it represents the hero, the court jester, the satirist, the sage, the wizard, the prince, the pauper, the poet, the wit, the lover, the romantic: one by one, entangled in a symbiotic waltz with "the shadow".

The metamorphoses - as we transition between the flip personality sides - is expressed musically by instantly reverting to a different musical language, moving between the tonal and atonal and to and fro-ing between full symphonic romanticism and angular minimalism, for instance. This is a good example of polystylism, on which I'll expound a little more below.

As for Australian influences, I've written a work for an Australian orchestra and an Australian soloist. I was born in Australia and consider myself by and large Australian (notwithstanding my Italian heritage and strong connection to the latter's culture, language and arts). Hence everything I undertake artistically must by definition be intrinsically Australian whether consciously or subliminally.

The trombone is often overlooked as a versatile and powerful instrument in orchestral repertoire. What influenced your selection of the trombone as the solo instrument for this concerto?

The idea to write for trombone actually came from the ASO's CEO Vincent Ciccarello. To be sure, I suspect his suggestion had much more - if not everything - to do with the capabilities of its player, the orchestra's principal trombonist Colin Prichard, rather than the instrument. I was instantly intrigued by every facet of the project and took to the idea of writing for the player and the instrument with great enthusiasm.

Colin Prichard will be performing Ligeia with the ASO. Did you work with him during the composition process, and how has he influenced the final piece?

I've had many conversations with Colin, who taught me so much about his instrument. With someone of his ability, you soon realise that standard references are not very useful, since he can play well beyond the standard range and can accomplish feats that would frighten most trombonists. As a composer, I needed to discover what his parameters were, rather than those of the instrument. Our initial talks were essentially about finding a common ground, so I could create a piece that was as much his as mine. Our common ground turned out to be incredibly fertile and I was delighted to discover that we shared many musical values.

Did you discover anything new about the trombone in the composition process? How has your relationship with the instrument evolved before and after that process?

I discovered many new things, including extended techniques, the huge variation of range capabilities between individual players, how the instrument works etc.

Before undertaking the project my working knowledge of the trombone's capabilities did not extend much beyond its functionality as an orchestral instrument. To write a part that will excite and challenge a virtuoso practitioner though - in a musical medium where a few parting of the waves are expected - is an entirely different universe which required a huge leap in my understanding of the instrument.

I explored how I could cajole qualities from the trombone one doesn't normally associate with it. Is it capable of weeping, for instance? As a solo instrument, it has a huge range of capabilities, from comedic gestures to being heartbreakingly mournful, and it was a delight to explore as its kaleidoscopic array of faces.

You follow the tradition of Leonard Bernstein and Andre Previn - two composers who have found the sweet spot that overlaps between classical, jazz, and popular music. How have you found your own voice working across these styles and how would you describe your work now? In a world full of creative cross-pollination, are these categorisations relevant?

When we talk of sweet spots, there is always a danger of one's work being mistaken for crossover or worse, cross genre. To be clear, I've never been a fan of cross genre projects, as I believe they are essentially a meeting of comfort zones. When practitioners of different genres come together, they usually do little to alter their musical world view in order to accommodate the new (combined) paradigm. This is analogous to combining two fully cooked meals on the same plate. There is no creative symbiosis and instead of getting the best of both worlds, you end up with musical indigestion.

Previn and Bernstein covered a lot of ground, but didn't do it all at the same time. Previn was not a jazz pianist while he was conducting Mahler, and Bernstein was not thinking of the jets when composing Chichester Psalms. I am totally absorbed in whatever medium I'm working in - to the exclusion of everything else, at least on a conscious level.

Unconsciously, it's inevitable that one's life experiences - which includes all musical ones - are likely to seep through. The thing that makes it work - and this is crucial - is that everything one does must be expressed through the prism of the medium one is working within. Bernstein famously incorporated a fugue in the middle of West Side Story, but channelled it through the prism of musical theatre. That's what makes it authentic.

Whilst fully gestated genres don't mix well, I do, however, believe it is possible for a composer to avail themselves of myriad raw compositional material from those genres and combine the ingredients in such a manner that an entirely new music - an authentic music - emerges. Schnittke wrote much on this process, and whether he coined the phrase or not, he was fond of referring to himself as a polystylist, which I think is a characterisation that perhaps best befits me. (I don't think Bernstein and Previn were polystylists.)

The challenge with polystylism is to remain authentic at every moment and if one is moving from say, ancient music to atonal within the same work, the transition needs to be seamless and organic. As to whether I've found my own voice, I do have a strong sense of the music coming from me - notwithstanding the inevitable influences we all have - so it feels like I have my own voice. Whether it is received as such is for others to say, not for me.

Can you share what projects you're working on next?
I'm currently writing a work for clarinet and string orchestra for Phil Arkinstall (associate principal of MSO) and the Melbourne Chamber Orchestra, to be premiered in late May. Following that I have a commission to compose an Organ work for organist Rhys Boak, which will be interesting, since I've never composed for solo organ. There is also exciting large orchestral project in the pipeline which I can't say much about at this stage.

An important part of my music making is my duo with violinist Zoe Black, which is always ongoing throughout my compositional activities. We're both particularly excited about working with the students at ANAM as part of a residency program later this year- several workshops which will culminate in a concert wherein Zoe and I will be performing with the students. The repertoire will mostly be my compositions - some of which are orchestral works that I'm adapting for smaller ensembles.

And finally, would you like to share any Australian artists or works that has inspired you lately?
I've been inspired by Angie Coffey, a Melbourne composer who writes such beautiful songs. I had the pleasure of reimagining one of them recently.


The world premiere of Joe Chindamo's Ligeia - Concerto for Trombone and Orchestra will be performed by Colin Prichard and the Adelaide Symphony Orchestra and conducted by Brad Cohen at the Adelaide Town Hall Friday 13 and Saturday 14 May 2022. More info.