Insight: Are We There Yet?

David John Lang writes about travelling around Australia with characters from Alison Lester's award-winning children's classic, and finding out that even a PhD can come in useful on a road journey. For details about the ASO's concert with Lang's new work, see the AMC Calendar 22 May. More Insight feature articles by the AMC's represented artists.

I feel like I've been doing laps of Australia. If you've ever had a child asking you to read Alison Lester's Are we there yet? for the umpteenth time, you will have some idea what I mean.

It wasn't my idea. About two years ago, I went to a meeting at Grainger Studio, and Vicki McGregor (then the Adelaide Symphony Orchestra's Learning & Community Engagement Coordinator) handed me a picture book. The ASO wanted to know if I'd be interested in 'writing some songs' to go with Alison Lester's words and illustrations, something suitable for a small group from the orchestra to play to primary school children. Vicki flicked through the book, showing me the colourful illustrations and sharing how many of them made her think of music: the 'whale lullaby' at Head of Bight, the boab trees that look like 'opera singers' at Windjana Gorge, the 'trees whispering' in Kata Tjuta...

That fired my imagination right away, and I agreed to the commission without much further thought. Then it began to grow in my mind. 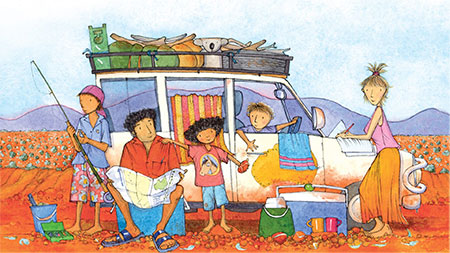 Lester's travelling family on the cover of Are We There Yet?
© Alison Lester / Penguin.

Are we there yet? follows a family of five on a journey around Australia, starting and finishing at the tiny town of Binnum near the SA-Victoria border. It is essentially an illustrated travelogue, which means that, as a story, it is made up of a lot of very small pieces. I counted 58 distinct locations that Grace's family visits, with a sentence or two to describe her impressions of each one.

Now, I could have glossed over most of those locations (with musical padding or even silence) and simply written a few extended songs for the main highlights - which, come to think of it, is probably all that was expected of me. But I couldn't help but wonder: was there a way to match the book with music all the way through, and yet keep it coherent?

That meant connecting everything together, somehow. Alison Lester had done that in the book with several recurring 'motifs': Grace's hat, her mother's fear of heights, her older brother being annoying. Also, of course, there was her younger brother Billy's constant question, 'Are we there yet?' That clearly needed to be a song, something with a catchy pentatonic melody.

I went on a roadtrip with my wife, Elsabeth, to the Blue Mountains in October 2019, and we began trying out some ideas. Billy's question pops up eight times in the book, and I came up with a short, easy-to-learn song that grows by a bar at each appearance. Being pentatonic, the melody is able to remain essentially identical even as its accompanying harmonies change considerably depending on the landscape: a simple pedal note accompanies it across the Nullarbor, sumptuous ascending seventh chords provide an overstorey in the Daintree, and a weary, rain-soaked ostinato drags along in Davenport.

But it wasn't enough, musically, to just keep coming back to the same song. What about the rest of the music? It would still sound too disjointed if I was to simply try and depict each location with 20 seconds of 'musical landscape painting.'

It was at this point I remembered that I had recently completed a PhD and that it might actually be useful for something. My topic had been: 'Variations on a Theme as a Means of Musical Storytelling.' Variation form was staring me in the face as the answer. Alison Lester's book worked because her theme was Grace's family - the locations in the book were not a string of generic tourist snaps, but a variety of settings for her characters to be themselves in (you can see them in almost every picture). But what was to be the musical theme? I was very aware that connections between music and landscape already run deep in Australia, thanks to the Aboriginal songlines that crisscross the continent. But as keen as I was to acknowledge and celebrate this (and I found ways to do so in several of the song lyrics), I did not want to presume to speak for a culture not my own, so using Indigenous music wasn't an option.

Eventually I hit upon the solution: the musical theme would be the sea shanty 'Bound for South Australia'. It's a fairly well-known tune, and it provided an answer to Billy's question. If the 'there' in 'Are we there yet?' is home, and home is Binnum, then one is effectively spending the entire trip 'Bound for South Australia.' Knowing the key to any good theme is simplicity, and, at Elsabeth's suggestion, I reduced this song down to its basic rhythm, and away I went.

I set out on my first virtual lap of the country in early 2020, writing out a piano score from beginning to end (51 hand-written pages). I aimed to 'visit' at least a couple of places each day, and I eventually completed the 'journey' around the middle of March - just when real-life journeys became impossible!

The next 'lap' was going through the entire score again and arranging it for a chamber ensemble. At the ASO's request, I was writing for octet: flute, clarinet, trumpet, trombone, violin, cello, double bass, and as much percussion as they could fit in the van.
The tongue-in-cheek question of my friends - 'Are you there yet?' - was by this time wearing thin, but just when I thought I could finally answer 'Yes!' the ASO commissioned me to re-arrange the whole piece again, this time for small (double winds) orchestra.
So it was off on another lap of Australia over the New Year period, readying the score and parts for a workshop in February (what an honour to have a whole day of the orchestra's time to work on the piece!). And then one more lap after that for a final revision, just completed.

I can't quite believe what I've done now. I definitely feel more like a kid - a passenger - on this road trip than the driver. The original concept (which suited me so perfectly!) and the commission came from the ASO. The beautiful book came from Alison Lester. Experience working with primary school students came from my 'day' job in the Music is Fun Band. Lots of constructive feedback came from Elizabeth McCall (narrator/singer), David Sharp (conductor), Paul Rissmann, and others. Ongoing encouragement came from my Composition Prayer Team. And I just went along for the ride, and I've had such an amazing time. And now I want to share it!

> Alison Lester - writer's homepage - see also Are We There Yet?