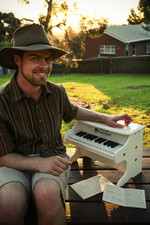 David John Lang is an Australian composer living in Adelaide. He writes music for orchestras, choirs, singers and instrumentalists, always seeking to create art that is inventive, thoughtful and heartfelt. His music often reflects his love of storytelling, his Christian faith, his whimsical sense of humour, and an instinct for drama.

David's music exists thanks to the support of many other musicians. He has been commissioned by many local ensembles (including the Adelaide Symphony Orchestra, Adelaide Youth Orchestra, and Adelaide Chamber Singers), but his music has also been performed in the USA, Canada and Germany. In 2016, David spent several weeks in Alaska on a Composing in the Wilderness course, and in 2012 he attended the Atlantic Music Festival in Maine.

David studied composition at the Elder Conservatorium of Music in Adelaide, where his mentors included Graeme Koehne, David Harris, John Polglase, Charles Bodman Rae and Anne Cawrse. He was awarded a Doctor of Philosophy in Music Composition in 2019, for a portfolio of compositions that explored the storytelling potential of variation form in instrumental music.

David also loves speaking and writing about music. He has written concert program notes many performers and ensembles, including the Australian String Quartet and the Australian Chamber Orchestra. Most of his skills in this area were developed as a result of winning the 2010 Australian Youth Orchestra's Music Presentation Fellowship.

David is also active as a performer. He has been Assistant Conductor of the Adelaide Wind Orchestra since 2016, and was Music Director of the A-grade Unley Concert Band in 2019. He also performs on trumpet, keyboard, and vocals with the aptly-named Music is Fun Band, sharing the joy of music with primary school children all over South Australia.

When David remembers there is more to life than music, he enjoys reading, bushwalking, and eating good chocolate.