Image: Dulcie Holland - a detail of a family Christmas card (see below for a larger image)
© June Imrie's private collection

Steven Hillinger: The aim was to program a piece by Dulcie Holland because 2013 marks the 100th anniversary of her birth. This year there are a lot of celebrations going on with the anniversary of Verdi and Wagner. I thought it was also important to celebrate an Australian composer's anniversary.

Aside from the fact that she was well known and loved in Australia, she also had a strong association with the North Sydney Symphony Orchestra. Her husband, Alan Bellhouse, founded the orchestra in 1947 and she was part of the foundation. She played cello in the orchestra, she wrote a number of pieces for the orchestra and also conducted the orchestra, often in her own work.

SH: The NSSO library has several pieces by Dulcie which she composed specificially for the North Sydney Symphony Orchestra. We have quite an extensive library, most of it very old. Some has been there for a long time and is not in very good condition, but it's quite comprehensive. Dulcie's pieces are in there as well.

Most of the pieces she wrote for the orchestra have never been published, so they are literally hand-written. I took all the pieces out of the library and went through them as best as I could and chose one I thought represented Dulcie.

HC: Handwritten parts are often a challenge for musicians. Did you have to do a lot of work on tidying up the parts?

SH: We have played it before from the original parts but it was obviously written at great speed, and it is quite tricky to decipher. It's not always tonal. When you are looking through you have to decide whether that is actually what she wrote, a slight misprint or just reading incorrectly…

We're very lucky to have a few tech-heads in the orchestra who had a little time up their sleeves. They entered it all into a music program to try and make it somewhat more legible. It's very time-consuming. I spent hours emailing and on the phone, trying to sort out exactly which note made sense.

I'd love to be able to do that with all of her music. We actually have seven of her works in the library, and I know there are others she wrote for special occasions, which we don't have. They could still be in the family home somewhere, or just lost, which would be a great shame. It is so important that we keep it, that it doesn't get destroyed. Too much music has just disappeared. There's definitely some more research to be done!

SH: Very often when you take out a work, you'll try and learn about the circumstances, the history of the moment. A lot has been written about Dulcie and her contribution to music, to music education, music theory, her piano repertoire but I haven't been able to find any information about why she wrote this specific work and why she called it Summer's End. It could be programmatic, but who really knows? Listening to the music, it's very simply written. The melodic line is straightforward. It's sparsely written, a base accompanying line with flowing melodic lines above.

When I first heard it the whole thing made me think of reminiscing - whether to one's childhood, or the summer that was, the walk down to the beach. Then I looked at the time she wrote it and I'm sure it's one of her last compositions. She died in 2000, so she was 80 years old when she composed it. From that point of view she may well have been looking back over her own life, and summer would have been her life. Who knows? We don't necessarily need to know and that's the great thing about music - you can have your own ideas and thoughts.

HC: You have a personal connection with Dulcie. Tell me about that.

It was Dulcie who introduced me to the North Sydney Symphony Orchestra. She encouraged me to audition when the job came up in 1998, which I did, and got the job! She was a patron of the orchestra at that time. She had retired and wasn't performing any more but she remained a patron of the orchestra up until her death, and she came to every concert. She was always in the audience, always encouraging, always said how pleased she was that the orchestra was in good hands. She was very old school, a sweet, sweet lady. 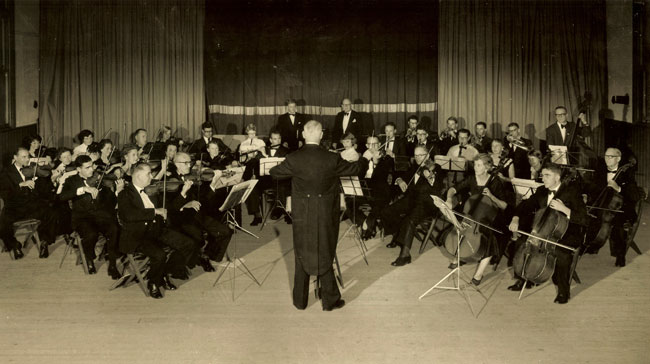 Dulcie Holland, in an interview for 'In Tune: a look at the musical life of North Sydney' (compiled by John Shortis, 1994):

The orchestra was like our extended family, and handling people was a vital part of it. Alan was an enthusiastic conductor; he had a good way with people. If someone with some obscure instrument rang up and we had no music for such a thing, Alan would say, "Come along, we'll have something for you to play." And he'd say to me, "Write a part'. It was good for me because it made me study the instruments and get to know what they could do. That's how I learned my orchestration, really, doing it on the site.

A Christmas Card from the Bellhouse family, from the private collection of Mrs June Imrie - a founding member of the orchestra who will be playing in the concert of 1 June.

Add your thoughts to other users' discussion of this article.

ADO do Holland in Newcastle too

Thank you both, Harriet and Steven, for these thoughtful and charming reflections. Quite coincidentally, this piece was programmed last month (April 28th) by Warwick Stengards and the Australian Doctors' Orchestra for our concert in Newcastle, so it's wonderful to know that this beautiful miniature tone poem will get at least one more outing in Dulcie Holland's centenary year. One of our less appreciated composers, and one whose music is sometimes quite arresting — I'm thinking of the tightly constructed, chiselled piano sonata, a far cry from the stock AMEB children's fare to which women composers were expected to confine themselves during most of her lifetime. All good wishes for the concert.