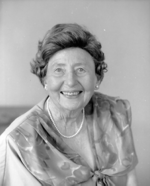 Born in Sydney in 1913, Dulcie Holland trained at the NSW State Conservatorium of Music, where she studied piano with Frank Hutchens, cello with Gladstone Bell, and composition with Alfred Hill. She graduated with her Teacher's Diploma in 1933. After leaving the Conservatorium she studied for a time with Roy Agnew.

Travelling to London, Holland studied at the Royal College of Music with John Ireland, and at the end of her first year was awarded the Blumenthal Scholarship (which provided for three years of study at the RCM) and the Cobbett Prize for Chamber Composition. With the outbreak of World War II the next year, however, she returned to Australia to work as a freelance composer. On a return visit in 1950 she studied with the serialist composer Matyas Seiber.

During the 1940s in Sydney, she combined family life with producing a considerable output of original music. It was in 1944 that she composed one of the greatest treasures of Australian music, the Trio for violin, cello and piano.

In the 1950s her musical output turned in a new direction, when she was associated with the Department of the Interior as composer of music for some forty films documenting life in Australia, produced at the time of the large post-war intake of migrants.
In 1973 the first of Holland's many books on the technique of writing music appeared. To her, it was a matter of logic that a teacher should help others in explaining the art of two-part writing, melody writing and so on, and Dulcie's books on musicianship and related matters remain a unique educational contribution and their fame has spread far and wide.

Book: An analytical study of the piano works of Roy Agnew, Margaret Sutherland and Dulcie Holland, including biographical material / by Rita Sandra Crews.