The idea of this project started when I first read the incredible novel Confessions by the celebrated Catalonian author Jaume Cabré in 2016. I could not stop thinking about the stories and characters of the novel for weeks. Soon enough, the idea of writing a symphony based on Confessions came to my mind.

But it was not until September 2018, when I saw Jacob Cordover play a concert in Canberra, that I realised that a concerto for guitar and orchestra would be a more suitable format. Jacob and I talked after his concert and he liked the idea of the guitar playing the protagonist of the novel, Adrià. The same night I wrote to Jaume Cabré's publisher explaining the project, how much I loved the book, and I also asked if I could put the novel to music. To my surprise, I got an answer the following day. Jaume Cabré was intrigued and wanted to talk more. 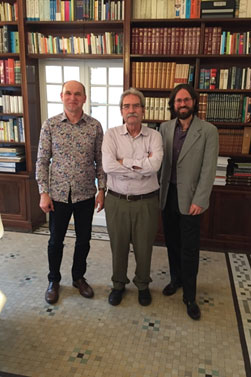 As if it was meant to be, I was going on a work trip to Spain in October, and Jacob and I met with Jaume Cabré and his literary agent Gloria Gutiérrez at Agencia Carmen Balcells in Barcelona. I was excited to meet my literary hero. We talked for an hour and a half about all the details of this project, and Jaume Cabré even picked up his favourite title from my selection of possible names for the adaptation of his novel - Adria's Confessions. He also generously granted me permission to use the names of the novel's seven chapters as the titles of the movements in my book-concerto. I was euphoric after the meeting, and Jacob and I grabbed some tapas at the Diagonal and talked further about what to do next.

Jacob started working hard 'on the ground' in Barcelona with the director of the Reial Cercle Artistic, Cesar Mateos, to get an orchestra and a venue suitable for the project, and I got into writing a grant application to help finance the project. A few months later, it was announced that the project won the ACT Government $5-50K grant, and things started to really take off from there.

I had to first re-read the novel which, in its English translation, is 750 pages long, and reduce the complicated multilayered plot into text that could make the basis for the music. The intricate stories often jump from 1st to 3rd person and to different times, often mid-sentence, from Middle Ages through to 1950s, to WWII, etc. This masterpiece takes you on a journey like no other, and you cannot 'walk out' at the end of it unchanged. It has the profundity of Dostoyevsky, suspense of Agatha Christie, and the emotional impact of Hayao Miyazaki. No wonder it won so many international awards, sold a million copies world-wide, and has been proclaimed by critics to be a masterpiece of the literary canon.

When I finally started writing music for Adria's Confessions, it became clear to me that this was not going to be a typical guitar concerto. By necessity, I invented a new form, book-concerto, in which each character is consistently portrayed by a different instrument of the orchestra. I faithfully followed every plot of the novel in the music. This presented many challenges, as I had to combine instruments that are not conventionally grouped together. As a result, there are solos, duets, trios, quartets, etc., played by the various characters, creating interesting effects within the orchestral texture. Another challenge was to cover all the stories without making it too long for the audience and players alike. The final score is 53 minutes long and the eight movements flow fluently from one to another.

The piece is dedicated to Jaume Cabré. I have further expressed my gratitude for his willingness to collaborate on this project in the first movement, the C-A-B-R-E Fugue, where I use the notes C-A-B-D-E (D=re) for the fugue's exposition.

Sadly, due to Covid-19 travel restrictions, I will not be able to attend the premiere in Barcelona. But I am hopeful that Adria's Confessions gets its Australian premiere. Perhaps together with my latest work (book-concerto no. 2) Esme's Words, based on the novel The Dictionary of Lost Words, in collaboration with the author Pip Williams, her publisher Affirm Press Melbourne, and harp virtuoso Alice Giles.

> 'Confessions at the Palau' 21 April 2021 in Barcelona, Spain - event details in the AMC Calendar.