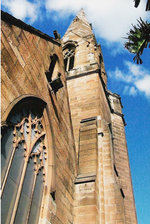 the Bourbaki Ensemble: war and peace: music for strings

Entitled "war and peace", Bourbaki's August programme revisits the contrasts embodied in our April concert, but elevates them to concerns of worldwide, even universal, significance.

Peteris Vasks' symphony "Voices" records the composer's reactions to the turmoil surrounding his native Latvia's separation from the Soviet Union in 1991. Its three movements "Voices of Silence", "Voices of Life" and "Voices of Conscience" are not devoid of hope, though the prevailing mood is one of apprehension in the face of an uncertain future. Similar, somewhat later, events in Kosovo formed one of the inspirations behind Brisbane composer Betty Beath's "Lament for Victims of War".

Our concert also features the world premiere of Carl St.Jacques' "Elemental Prayer Suite" for solo viola and strings, in which the composer will play the solo part; and a setting by Arvo Part of the Latin prayer Da pacem, Domine: Give peace in our time, O Lord.