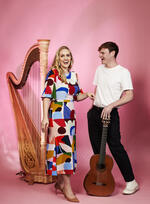 Amongst the exciting emergence of a new generation of classical musicians, guitarist Andrew Blanch stands out. He's found his own path as a soloist, winning first prize in the 2019 Adelaide International Guitar Competition, and the 2015 Melbourne International Guitar Competition. His collaborators include Ariel Nurhadi (with whom he released the album Alchemy on ABC Classic in 2020), baritone José Carbó (of The Metropolitan Opera in New York), the New Zealand Guitar Quartet, and American harpist Emily Granger. Emily grew up in Kansas City, Missouri, and is rapidly establishing herself as one of the world's most exciting new exponents of her instrument. She's performed as Guest Principal Harp of the Chicago Symphony Orchestra, collaborated and performed with artists such as Yo-Yo Ma, Renée Fleming and Jonas Kaufmann, and is a founding member of the Chicago Harp Quartet, with whom she has released two albums. Guitar and harp is an exquisite combination that whispers its secrets only in the most intimate and transparent acoustic. Small suites by Enrique Granados and Máximo Diego Pujol bookend this concert, which also includes works by Fauré, Ravel and Koehne, and the premiere of a new work for the duo by Elena Kats-Chernin.