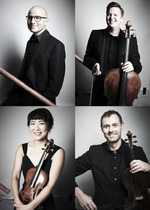 Australia Piano Quartet (APQ) has established a reputation as one of Sydney's premier chamber music ambassadors. Following a highly successful 2014 season, Thomas Rann, James Wannan and Rebecca Chan are delighted to welcome internationally acclaimed pianist Daniel de Borah as a member of the ensemble. 2015 is a year of further growth with performances throughout Australia including an eight concert series presented by Sydney Opera House at the Utzon Room, an expanded eight project collaborative concert series at UTS and performances at the Melbourne Recital Centre.

In 2015 APQ will embark on its first international tour including concerts at the Barbican Centre, Australia and New Zealand Festival of Literature and Arts (London), and the Australian Embassy in Paris. APQ is proud to be a champion of new Australian music, having previously commissioned and given world premiere performances of works by Elena Kats-Chernin, Nicholas Vines, Jack Symonds, Lyle Chan, Alex Pozniak and Felicity Wilcox. In 2015 the Quartet will be commissioning and premiering works by seven Australian composers: William Barton, Andrew Batt-Rawden, Huw Belling, Elliott Gyger, Nicholas Ng, Jack Symonds and Marcus Whale.

Music education is also an important part of APQ's vision and 2015 will see some exciting and innovative developments in the quartet's expanding education program. The Quartet’s residency at UTS provides a unique interface for cross-departmental conversation, challenging the boundaries of chamber music through collaborations across creative media and art forms. APQ seeks to be a potent and forward-looking creative force within the University, presenting reinvigorated interpretations of canonic masterpieces while unearthing many neglected works of past and present.

Further information for this event is available online at the event's website or by email to australiapianoquartet@uts.edu.au