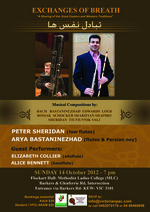 ‘Exchanges of Breath’ is the product of an exciting musical collaboration between two distinguished artists from very different musical backgrounds, Arya BastaniNezhad, from Iran, and Peter Sheridan, from the USA. In a cross-cultural exchange of musical sounds on flutes both ancient and modern, this cultural friendship brings together Eastern and Western musical styles in one concert program. The haunting colours, characters and stories of each musical tradition will be shared, combining the passionate tones of the Ney (the Iranian classical end-blown flute) together with the distinct sounds of the modern low flutes, including Alto, Bass, Contrabass, and the gigantic Subcontrabass flute.

Arya BastaniNezhad enjoys considerable success as a performer on the end-blown Iranian Ney flute. He has made numerous recordings and has given concerts throughout the world. Peter Sheridan, Professor of Flute at Monash University and well-known as a specialist in low flutes, has also performed internationally and is a recording artist with MOVE Records. They will be joined by Melbourne’s own Alice Bennett on Bass flute and Elizabeth Collier on Alto flute.

These works draw extensively on the lyrical quality of the flute family’s various voices and the musical traditions of the Far East, the Middle East, Europe, the Americas and Australia. From the well-known characteristically rhythmic style of Ross Edwards’ Ulpirra to the lyrical writing in Katia Tiutiunnik's De Profundis, the various flutes will explore the different timbres and expressions of two cultures. From Rosiak’s innovative Quasi Latino set for the modern low-flutes quartet, and the whimsical quirky language of Gary Schocker's Adventures Under A Leaf, to the natural heart-felt emotions of Shapiro's Below, there will be something for everyone in this exciting concert.

Drawing together performers from a variety of cultural backgrounds, this concert will feature American-born Melbourne resident Peter Sheridan (low flutes), Melbourne’s own Alice Bennett (Bass flute) and Elizabeth Collier (Alto flute) and recently-settled Australian residents Arya BastaniNezhad (flute & Persian ney) from Shiraz - Iran. The aim of Exchanges of Breath is to give Australian audiences the opportunity to hear Creative Expression and the New and Multidimensional Sound Worlds while pushing the boundaries of contemporary music performance practice. Sharing these experiences with audience is just as rewarding!

Further information for this event is available online at the event's website or by phone on 0452 070 179 or by email to info@victorianpac.com